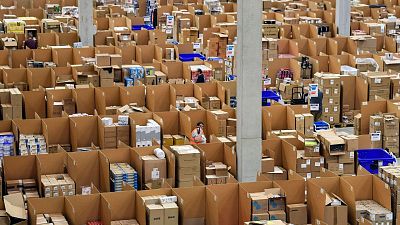 Earlier this year, Amazon quietly released its 2020 sustainability report. With all the distraction of moon missions and trips to space, you might have missed it.

On the bright side, the company has made some progress towards its environmental goals. The report comes not long after it co-founded The Climate Pledge and committed to achieving net-zero carbon emissions by 2040. Under the banner of ‘Further and Faster, Together’ the report underlines Amazon’s accomplishments in the last year.

But conservation organisation Oceana believes that the report is “shy on data” and says commitments like this from some of the biggest companies in the world deserve proper scrutiny.

They have concerns that the e-commerce giant is lagging behind other big tech companies in its efforts to combat its environmental footprint.

For them, the biggest problem is plastics.

Circling the Earth with plastic waste

They analysed packaging from e-commerce and found that Amazon generated more than 210 million kilograms of plastic waste in 2019.

This includes air pillows, bubble wrap and other materials used in the roughly 7 billion packages the company delivered that year. Their report found that air pillows alone would circle the Earth more than 500 times.

Amazon disputes Oceana’s estimates but won’t disclose the information needed to make the report more accurate. Matt Littlejohn, senior vice president for strategic initiatives at Oceana, says this is part of the problem.

“They're a very data-driven company. And that's why they've been successful,” he explains, “That's why it's important that you have measurable real goals that they can be held accountable against.”

At the beginning of June, 35 per cent of their shareholders voted for a resolution that would require the company to quantify its use of single-use plastics. It was a surprising result as many expected the resolution to be defeated at this initial meeting.

He says that while the report talks about commitments - such as 150 of the company’s fulfilment centres now taking back plastic packaging - there is very little information on what that actually means. Amazon claims it is increasing the recycled content of its plastic film bags from 25 to 50 per cent but Oceana points out that there is no data on how much non-recyclable material this really is.

“Ironically, I think that they actually are doing some important things that they're not talking about,” Littlejohn adds.

According to surveys done by Oceana, customers are hungry for more information on reducing plastic waste - like how to recycle their delivery packaging. Most of it is thin film, much like a shopping bag, and it can be difficult to find places willing to recycle this kind of plastic.

What they want most, however, is the option to choose plastic free delivery when they make their orders. The non-profit asked thousands of Amazon customers and found that the more they used the online retailer, the more likely they were to want ways to avoid waste.

“It makes sense because if you are very dependent on Amazon, you are getting a lot of stuff from them, you have a lot of plastic packaging and you’re probably more concerned,” says Littlejohn.

In India, Amazon has delivered on a pledge to eliminate single-use plastic in its packaging across its fulfilment centres. It follows a directive set out by Prime Minister Narendra Modi where he urged an end to the use of single-use plastic by 2022.

If it has been such a success in India - a country with a less comprehensive plastic recycling strategy than many of Amazon’s other markets - conservationists around the world are struggling to understand why it hasn’t been rolled out elsewhere.

There are innovations they have come up with to get around the packaging problem, none of which are ubiquitous enough to offset the damage being done.

Bubble wrap has been replaced with paper cushions and the company has forayed into using “100 per cent plastic-free biodegradable” paper tapes. A paper mailer has been created that uses glue as a cushion and the company is using it more and more.

It's also experimenting with other packaging-free options, shipping items without unnecessary wrapping to more than 100 cities. More than 40 per cent of items shipped to customers from the Amazon Fulfilment network now come without secondary packaging.

“This is not a company that can’t do the right thing,” Littlejohn says, “it seems like they are in some cases but they are not willing to own it, have a clear goal and be transparent about it.”

Oceana is calling on Amazon to listen to its customers as an immediate measure.

As the world’s largest international advocacy organisation dedicated to ocean conservation, they have a justified interest in doing so.

Our ocean’s wildlife pays a tough price for our spending habits: recent studies estimate that 90 per cent of all seabirds and more than half of all sea turtles have ingested plastic and the results are often fatal.

A lack of transparency on the company’s practices is a theme that has haunted Jeff Bezos throughout his rise to becoming one of the world’s richest men. Littlejohn and his team argue there has never been a better time to turn this around and match the needs of both its customers and shareholders.

“Getting the plastics issue on the company’s agenda and having over 35 per cent of shareholders support the resolution is a win for our oceans,” he says.

“Pressure will mount as more investors learn about the company’s plastic problem, as more customers call for plastic-free alternatives, as more legislators urge the company to reduce single-use plastics, and as more environmental and other groups push Amazon to act.”

7 ways this Olympic Games has been the most sustainable ever