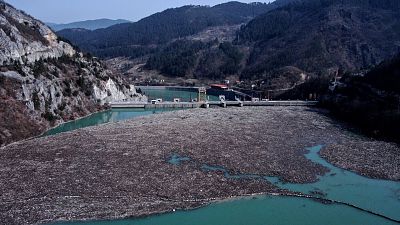 Environmental activists in Bosnia are warning that tons of garbage floating down the Balkan country's rivers are endangering the local ecosystem and people's health.   -   Copyright  Kemal Softic/AP
By Rosie Frost  •  Updated: 15/04/2021

The Vjosa river runs from Greece, through Albania and the Balkan mountains before reaching the Adriatic sea.

This 272km long waterway supports an incredible amount of biodiversity providing a home for 69 different endemic fish species. Vulnerable and endangered animals rely on it to survive, including the Eurasian Lynx which stalks through the forests that line the banks of the river.

It is one of the last wild ecosystems in Europe, so untouched that scientists refer to it as a “blank page”. We know less about the Vjosa than we do about the Amazon Rainforest.

But in the last year, the river has become the centre of a crucial renewable energy debate happening across Europe.

The river has become the centre of a crucial renewable energy debate.

Activists are fighting for the area to become a National Park, as they fear the future of the Blue Heart of Europe is being threatened by a so-called “Hydropower Gold Rush”.

Despite Albanian political leaders promising they will put a stop to any such plans, a campaign supporting the creation of a National Park has received backing from numerous NGOs and even celebrities. Building dams, they say, could be the end of Europe’s last free-flowing river.

The Vjosa River, its species, and the livelihoods that depend on them are under constant threat of destruction from dams. Watch Vjosa Forever with @Patagonia and sign the petition to ask the Albanian government to support #VjosaNationalParkNow: https://t.co/F8hojt3Xp2

They aren’t the only ones pushing back against hydropower plans either. Last year 150 NGOs including WWF came together to call on the EU to end public funding of new hydropower projects in Europe. Their manifesto said the environmental damage the projects could bring would outweigh the contribution of mostly small new dams to the green energy transition.

So why is this supposedly planet-friendly form of energy generation such a source of concern for environmentalists?

Why is hydropower an important energy source in Europe?

Over the last five years, the amount of electricity hydropower produces has grown by around five per cent in the EU. Currently, it makes up 13 per cent of our electricity mix, just behind wind power at 14 per cent. The renewable source has become integral to the EU’s target of achieving at least 32 per cent of energy from renewables by 2030 and net zero emissions by 2050.

“Hydropower will continue to play a vitally important role in the decarbonisation of Europe’s power sector,” Will Henley, a spokesperson for the International Hydropower Association (IHA) tells Euronews Living.

Where the energy source is particularly important is in storing excess wind and solar energy, according to the IHA. When the output is high, turbines can be run backwards to pump water up from a river or reservoir to store the power. Then, when it’s needed, the water can be released back down, propelling the turbines forward and producing electricity.

Grid operators are turning to hydropower for on-demand generation, when the wind isn’t blowing and the sun isn’t shining.

Will Henley
Spokesperson for the International Hydropower Association

“As countries shift away from fossil fuel plants and scale up investment in variable renewables like wind and solar power, grid operators are turning to hydropower for on-demand generation, when the wind isn’t blowing and the sun isn’t shining, and to provide long-duration energy storage,” Henley adds.

What’s the problem with hydropower?

Not everyone is convinced that hydropower is the way forward for renewables in Europe, however. There have been a number of campaigns from NGOs and communities to try and prevent the building of new dams. These groups are concerned about the impact that new hydropower could have on some of Europe’s few remaining pristine waterways.

“It's important to keep in mind that hydropower is relatively low carbon, it's renewable, but the ecosystems it relies on are not renewable,” says Claire Baffert, Senior Water Policy Advisor at WWF Europe.

She explains that migratory fish species are especially impacted by “fragmentation”. The term is relatively self-explanatory: anywhere that a barrier is put in place restricting the natural flow of water, a river becomes fragmented.

“Having a barrier or a dam in the river, it's like preventing the blood to flow in your veins. It's literally cutting the river.”

“Europe has the most fragmented rivers in the world,” Baffert adds, “and this is because of all the dams that have been built for hydropower.”

“There were some data produced last year that showed that in Europe than freshwater migratory fish populations have declined by 93 per cent since 1970, so this is really a drastic collapse.”

Sediment, small stones, sand and fine particles that move with the flow of the river, are also trapped by dams. This can have an impact on ecosystems both upstream and downstream, Baffert explains.

“Reservoirs, for instance, have specific issues linked to them, like temperature changes, for instance, or the level of oxygen in the reservoirs that are changing and that caused the proliferation of algae,” she says.

“Having a barrier or a dam in the river, it's like preventing the blood to flow in your veins. It's literally cutting the river.”

There are worries too that the energy source is not resilient to climate change.

Some models predict there could be a 10 per cent loss in electricity production from hydropower over the next 30 years as more extreme weather transforms the availability of water.

Are there ways to make hydropower more sustainable?

The IHA believes it is vitally important that any new plants have to be built and operated sustainably.

“Hydropower projects can, and should, be developed responsibly, with net-positive impacts on the environment and local communities,” says Henley.

“This requires them to be designed, implemented and assessed in accordance with internationally recognised good and best practices.”

For the IHA that means encouraging energy companies to use their Hydropower Sustainability Tools and carry out independent assessments of any new projects. Henley points to Iceland’s national power company, Landsvirkjun, as a good example.

“The assessment identified areas for improvement on communication and consultation. This prompted Landsvirkjun to implement changes across the entirety of their projects.

“Five years later, as a result of this commitment to sustainability, another one of their projects, Blanda HPP, was awarded the IHA Blue Planet Prize for excellence in sustainable development.”

WWF believes that efforts to make hydropower more sustainable across the EU should instead be focused on improving what we already have.

A report from the environmental organisation released earlier this year recommends refurbishing or decommissioning the bloc’s more than 21,000 existing plants to minimise their impact. Even with interventions to reduce the environmental and social impacts of hydropower, says Baffert, there still need to be considerations in place.

“I think what’s important is to really understand that when you’re refurbishing a plant you’re also extending the lifecycle.”

“So one should ask the question of whether you really need to keep this dam.”