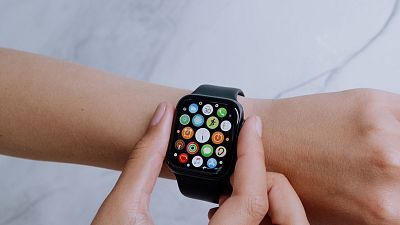 It could only be a matter of time until your Apple Watches are powered efficiently by sweat   -   Copyright  Canva
By Shannon McDonagh  •  Updated: 07/05/2021

New technology that would enable users of smart watches to power their gadgets with sweat has been discovered by researchers at the Tokyo University of Science.

The group of Japanese scientists have successfully tested a biofuel cell set up that generates electric power from lactate chemicals in the wearer's sweat.

Wearable technologies are seen as great tools for monitoring people’s health and improving functionality for those with accessibility needs.

By capitalising on sweat production we could be looking at a more environmentally friendly way of powering these devices that doesn’t rely on batteries. - It is a near-guaranteed source of biofuel energy produced by our own bodies.

This development seeks to address a problem once faced by smartphones that is now integral to the rise of this industry. Developers of wearable technology have long desired an energy source that satisfies user power demands without compromising on size.

Traditional button batteries are a problem for the sleek aesthetics that draw in a lot of consumers, and thinner batteries reduce the item’s ability to last throughout the day.

What does the device’s biofuel technology consist of?

This particular cell design carries the same appearance as a small paper bandage that can be worn alongside the user’s tech of choice, such as a Fitbit or an Apple Watch.

Paper layers carry the sweat efficiently via the “capillary effect” - the same transportation process you’d expect to see through placing drops of water on a napkin.

It contains a water-repellent protective layer that allows just enough sweat to be processed through the device without ruining the paper. In each cell, electrochemical reactions between lactate and a specific enzyme produce a current that is collected and transferred to the device.

"We expect they should be capable of powering all sorts of devices, such as smart watches and other commonplace portable gadgets.”

The wearable tech industry has never been bigger

Smart watches have become a mainstay of tech and wellness consumers for almost a decade. Google famously purchased Fitbit for an eye-watering €1.7 billion in 2019, and market leaders Apple reported record sales of wearable technology that surpassed 100 million people globally.

Those studying biofuel technology are especially excited by this development because it can be mass produced at a low environmental and material cost. It could see an already enormous industry overcome one of its final sustainability hurdles.