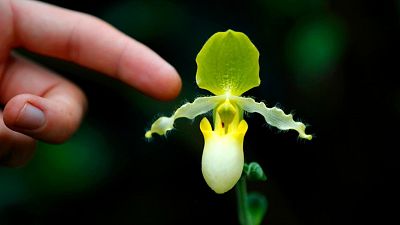 There are over 28,000 species of orchid around the world, growing on every available landmass other than Antarctica.

But while these highly-coveted plants may seem commonplace, they are quickly becoming an endangered species, as deforestation and overconsumption facilitate their decline.

"Of the 2,000 species we've done formal assessments on, over 50 per cent of those are endangered or threatened," says Michael Fay, an orchid expert at London’s Kew Gardens.

This weekend, a festival at the UK’s famed horticultural hotspot is hoping to highlight the fragility of this beautiful species - as well as what can be done to better protect it.

"There's lots of orchid ‘nuts’ that come specifically to Kew to see the collection. And I think that's the joy of the festival. There's the big blowsy displays for people to enjoy, but there's also the slightly niche, delicate little orchids that are rare and have to be admired up close."

A celebration of biodiversity

The flagrant flowers are particularly susceptible to deforestation, an issue deeply entrenched in the South American nation.

Since the end of World War II, over 80 per cent of Costa Rica’s rainforests have been removed, while 80 million square metres of land disappear every single year.

Kew Gardens is now using DNA analysis to determine how orchids are related to each other. Experts at the organisation hope this will paint a more accurate picture of the risks facing the species, while informing conservation efforts on the ground.

"Despite deforestation, Costa Rica is often held up as an example of a tropical country which is doing very good work in terms of management of the native environment,” says Michael Fay.

“The high elevation forests will often regenerate quite well, so it's a question of educating the farmers, educating the land managers. And one thing that Costa Rica was involved in from an early stage was ecotourism; developing an economic model which meant money was coming into the country which could be ploughed back into conservation activity.”

This focus on the natural world is reflected in the artwork on display at Kew’s festival. Installations in the Princess of Wales Conservatory include a series of sea turtles made from moss, as well as a resplendent quetzal formed from leaves - one of Costa Rica’s most spectacularly-plumed birds.

"Something like this is always very welcome in late winter," says Alberto Trinco, acting supervisor of the conservatory.

"You feel eager to have some colour, something exciting for spring and the orchid festival arrives and it's just this burst of colours that really makes the difference."

The festival opens on 5 February and runs until 6 March 2022.