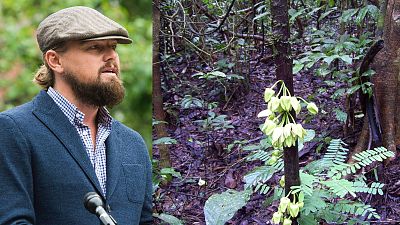 Leonardo DiCaprio has a new namesake in the form of a tropical tree from Cameroon.

The first plant species named in 2022 by the UK’s Kew Gardens, Uvariopsis dicaprio is so-called thanks to the film star's efforts to preserve its home in the precious Ebo Forest.

DiCaprio used his star power to help revoke a logging concession for the forest in 2020. The actor’s lobbying on social media led to it being overturned just one month after it came into force.

“We very much appreciated the support Leo gave us in campaigning to protect Ebo last year so it seemed fitting to honour him in this way, naming a species unique only to this forest, after him,” says Dr Martin Cheek, senior researcher in Royal Botanic Kew Gardens’ Africa team.

A member of the ylang-ylang family, the tree is considered critically endangered because of ongoing threats to the forest from logging, mining and the conversion of its habitat to farmland.

Spanning half of the Yabassi Key Biodiversity Area, Ebo Forest is one of the largest intact rainforests in Cameroon. It is home to many other unique or threatened species including elephants, gorillas and the only chimps known to both crack nuts and fish for termites.

The Cameroonian government announced in February 2020 that almost 1,300 square kilometres of the forest would be cleared for felling sparked an international campaign to save it, led by Cameroonian researchers.

It also spurred botanists on to prepare a conservation checklist of the forest’s native flora and fauna, during which time the four-metre tall Dicaprio tree was collected by Kew scientist Lorna MacKinnon.

Plants are often named in honour of people, typically other scientists who have shown a commitment to the research field or area. And a celebrity namesake can help an imperiled plant make headlines around the world.

But this tropical tree is not the only species in need of attention. 205 plants and fungi were named new to science in 2021, many already endangered - here are just five highlights from Kew’s list.

5. A ‘ghost’ orchid that grows in almost complete darkness

Botanists were transfixed by the discovery of a ‘ghost’ orchid in Madagascar. Didymoplexis stella-silvae was named the “star of the forest” as it grows in almost complete darkness and has star-like flowers. This ethereal beauty is leafless and depends entirely on fungi for its energy. Its bright white flowers open immediately after rain before disappearing 24 hours later.

The unique orchid was one of 16 new species named last year, all from Madagascar, but unfortunately three were already thought to be extinct in the wild before being officially recorded. One, Habenaria crocodilium was first found by a crocodile enclosure and is now believed to be lost to a climate change driven flash flood.

“It really is a race against time to document the island’s incredible biodiversity before it’s lost,” says Kew researcher Johan Hermans.

A wild tobacco species has been reported to kill insects for the first time. It’s called Nicotiana insecticida and is one of seven new species of the plant family collected by scientists in Australia last year.

It might look pretty benign to the average passerby, but sticky glands enable it to snare and kill small insects such as gnats, aphids and flies. And its deadly nature is not diminished by distance. Seeds collected by a highway truck stop in Western Australia and cultivated back in the London glasshouses grew into killer plants too.

“The arid parts of Australia, which include most of the continent, have been thought of as almost barren with limited plant diversity, but in recent years these poorly studied areas have yielded many new and unusual species,” comments Kew scientist Professor Mark Chase.

"Nicotiana insecticida demonstrates well the adage that ‘tobacco kills’, although in this case it is insects that become ensnared on its sundew-like glandular hairs and die.”

Named for its resemblance to an exploding firework, this new primrose species, Ardisia pyrotechnica, was found growing up to four metres tall in the forest in Borneo.

One of the scientists who helped to name the species, Shuichiro Tagane from Kagoshima University in Japan, says “the firework forest primrose is named for the white flowers that stand out brilliantly when the plant flowers in July, and seeing the magnificent, flamboyant flowers is a real sparkling pick-me-up in the hot and humid tropical rainforest.”

Unfortunately A. pyrotechnica is already assessed as critically endangered under IUCN criteria. A handful of plants have been found growing in just two locations with palm oil plantations threatening its survival.

This extremely rare species, Pseudohydrosme ebo, is restricted to a small corner of the vast and amazingly diverse Ebo Forest of Cameroon - making it a neighbour to DiCaprio’s tree.

The forest is also the ancestral home of several local communities, including the Banen people, and 75 threatened species of plant - eight of which are unique to the forest.

The voodoo lily flowers from an underground tuber when its leaves have died back, and the flower spike can reach 30cm in height. It is the only member of the genus in Cameroon, with all the other species found in Gabon.

1. A rare British fungus with teeth instead of gills

A rare tooth fungus with refined taste, Hydnellum nemorosum has been found growing in the royal grounds of Windsor Park. It was actually collected in 2008, but it took mycologists 13 years to determine that the samples were from a new species.

It is one of a tiny group of fungi that form mushrooms with teeth under their caps, in place of gills. They thrive in poor soils with low nitrogen levels and have a mutually beneficial partnership with living tree roots, swapping soil minerals for leaf sugars. Populations have declined across Europe due to habitat loss and elevated levels of nitrogen in the air, so they’re now recognised as threatened with extinction at global and national levels.