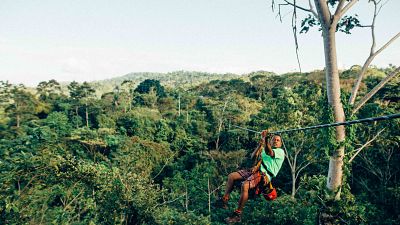 Costa Rica has stopped and even reverse deforestation over the last few decades.   -   Copyright  Perry Grone/Unsplash
By Rosie Frost  •  Updated: 18/11/2020

In the 1940s more than three-quarters of Costa Rica was covered with trees.

From lush tropical rainforests, home to hundreds of rare species, to cloud forests at the top of the world a total of six different ecosystems could be found across the tiny Central American nation.

But the decades that followed devastated the country’s forests as logging companies turned this irreplaceable natural resource into profit. Land was cleared to be used for crops and livestock, changing it forever. An all-too-familiar story in tropical regions where an area of rainforest the size of a football pitch is thought to be lost every 6 seconds.

By the 1980s, only a third of the woodland that used to blanket the Central American nation remained. It had one of the highest rates of deforestation in all of Latin America.

Reading its history, you might not expect Costa Rica to be world-leading in its conservation efforts. In a remarkably short space of time, however, the country has managed to dramatically turn things around.

It has become one of the first tropical countries to all but end deforestation and reverse its loss of nature. Today, around 75 per cent of its land is once again covered in forest. Making up just 0.03 per cent of global landmass, Costa Rica now protects 5 per cent of the world’s rapidly shrinking biodiversity.

So how did they do it?

To avert ecological disaster Costa Rica made a series of bold decisions that have resulted in it repeatedly being named the happiest, greenest place on earth.

Usually, escaping hunger and poverty means a country’s environmental impact soars. The process is called, ‘structural transformation’ by economists and it involves a series of societal changes. Farming becomes less common, people move to cities to find work and industrialisation leads to pollution. Eventually, the economy ideally modernises to the point where it starts to clean up.

But countries can stay stuck in the dirty, industrial phase for a long time if economic gains don’t filter down to ordinary people. Costa Rica avoided this by giving land, money and education to people as a way of empowering communities.

After a brief but violent civil war, it abolished its army in the late 1940s. Instead of spending money on guns and military supplies, resources were channelled into the development of education and culture. There is still work to be done on income inequality in the country but its overarching approach has allowed it to modernise without a heavy environmental footprint.

The government also discovered that the quickest way to persuade people to care about the environment was to incentivise them. In 1997, Costa Rica developed something called Payment for Environmental Services (PES), a tool for fighting poverty and deforestation at the same time.

PES gives money to landowners who preserve the environment through actions like the conservation of biodiversity, protecting sources of clean water or the storage of carbon.

This programme is now funded using taxes from fossil fuels. It has provided landowners in some of the poorest parts of the country with over €420 million in the last 20 years. More than one million hectares of forests are now protected by the PES programme.

How to fund a continuing environmental revolution

The country’s respect for the environment is also being reinforced by its successful ecotourism industry. Nearly two-thirds of the three million people that visit Costa Rica every year do so because of its nature, according to the tourism board.

Tourism makes up 8.2 per cent of the country’s GDP and around 10 per cent of citizens are employed in the sector. Unlike some other destinations that rely on visitors to keep their economy afloat, the industry is helping to protect the environment that draws people in rather than destroying it.

Had we chosen a model of aggressive growth in mass tourism, then there would have been no conservation of nature.

“We made a decision as a country that tourism would become a tool for social progress, not just an industry that produces jobs,” says Gustavo Segura Sancho, the country’s minister for tourism.

“Had we chosen a model of aggressive growth in mass tourism, then there would have been no conservation of nature.”

He explains that the small rural and coastal areas, likely to attract the most visitors, are also those most in need of social progress. In the last 30 years or so a healthy number of tourists has allowed the building of multiple new schools, hospitals and health clinics to strengthen these communities.

It has led to a 97 per cent literacy rate which makes sharing all kinds of information among the population a lot easier. Segura Sancho says that tourism now helps to directly fund this combined approach to education, health and conservation.

“What that has really meant is we have now 26 per cent of our territory in some form of conservation and the main source of financing for those efforts of conservation, is tourism,” he adds.

Although Costa Rica can regulate conservation within its own borders, the threat of global climate change is still proving an urgent problem. The IPCC has identified the country as one of the global hotspots where weather conditions could drastically transform the landscape in the next 50 years.

Increasing numbers of fierce tropical storms and hurricanes have led to torrential rain across Central America in recent weeks. Tropical storm Eta hit the region not long ago and the indirect effects of this extreme weather have led to widespread flooding in Costa Rica.

This year has seen a record-breaking hurricane season and climate scientists say that unusually high temperatures in the Atlantic Ocean could be to blame. The warmer our waters become, the more energy is available in the planet’s weather systems. Storms then have the potential to get bigger and more damaging.

Costa Rica is sadly feeling these effects of the rest of the world’s inability to meet emissions targets - despite using nearly 100 per cent renewable energy and being on track to reach carbon neutrality by next year.

It certainly isn’t perfect. The country still has a long way to go when it comes to making sure its successes can continue, but conserving the environment by supporting its people represents a step in the right direction.

If more governments began reflecting on Costa Rica’s progress, we would all stand to gain - especially places like Central America, which are already on the frontlines of the climate crisis.