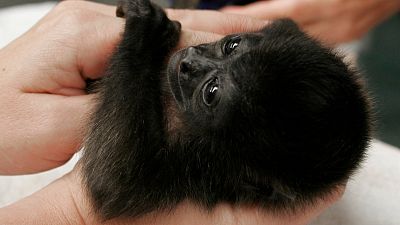 Costa Rica's howler monkeys have to learn to live alongside potentially deadly infrastructures as their natural habitat of trees is being supplemented by high-tension power cables amid increasing human expansion and tourism.

The howler monkeys, aptly named for their cacophonous cries which can travel up to five kilometres through the dense forest, are native to South and Central American forests.

The animals move from tree to tree in search of food, but when there's not ample forest cover, they must use streets, roofs, and even wiring to reach their next meal.

According to Costa Rican NGO 'Salve Monos' ("Save Monkeys") which has registered a decade of electrocuted animal cases, about 80% of the monkeys that suffer electrocution die.

"The monkeys use their four legs and their tails to move around, and when they travel on the electric cables, they touch the positive and negative poles and are instantly electrocuted," explained 'Salve Monos' co-founder Patricia Sterman.

"The electricity enters on one side and leaves on the other side, passing internally through the monkey's body, then most probably it starts to burn its stomach, lungs, liver, and other vital organs," added the NGO co-founder Simona Daniele.

And if the alfa male is one of the victims, it can result in a massacre.

"When an alpha male howler monkey of a herd dies, a new alpha male is reinstated and the new alpha male must kill all the offspring of the male that died because he must produce animals with the same DNA," Daniele revealed.

The remaining monkeys are likely injured, orphaned, or amputated at rescue centers.

Save Monkeys fears it will soon be reporting at least one death a day, and that howler monkeys will die out as a result.

The NGO is calling for more measures to protect the monkeys, including the construction of walkways, reforestation, and better power cabling by companies.

"Climate change and uncontrolled real estate development on the Nicoya Peninsula are causing the displacement of wildlife to unsafe places, which presents us with new challenges from the environmental point of view and the quality and continuity of Coopeguanacaste's electrical service," said Roberto González Calderón, who is in charge of the technical maintenance department at the energy firm.

'We can do better'

In Nosora, a village near Costa Rica's west coast, the Sibú Wildlife Sanctuary has established more than 50 hectares of conservation space for different animal species.

The sanctuary also has a jungle gym for injured and disabled howler monkeys.

"We put drop nets in it, we put lots of plastic bridges, in case they would lose their balance, or they would fall. And we put them in so many different places inside throughout the entire habitat to catch them," explained Vicky Coan, the sanctuary's founder.

Coan and her colleagues are calling for insulators to be wrapped around Costa Rica's transformers and power lines. All future tourism and housing projects should have underground wiring, they say.

"It's not correct to be able to do that to any animal, they did not deserve that, that's their home," Coan went on. "We can do better, we can insulate."

Also known as Congo monkeys, the animals are classed by the International Union for the Conservation of Nature as vulnerable on the list of threatened species. Their population is already decreasing.

Residential and commercial development and agriculture are some of the main threats to its existence, says the IUCN.