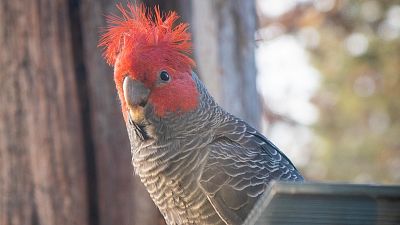 The gang gang cockatoo is one of the Australian bird species featured on the album.   -   Copyright  Unsplash
By Rosie Frost  •  Updated: 16/12/2021

An album of songs from rarely heard endangered birds has flown to the top of the music charts in Australia.

Called “Songs of Disappearance”, it is made up entirely of squawks, tweets and chirps from 53 of the country’s most threatened bird species.

Songs from these birds were collected over nearly four decades by wildlife sound expert David Stewart. Some took hours of waiting, hidden in the undergrowth in the remotest parts of Australia to record.

Released on 3 December, the album debuted in the top five of Australia’s official ARIA charts, pushing out hits from The Weeknd and ABBA. It owes its success to a social media campaign that helped it make history by becoming the first album of this kind to reach the top five.

Thanks to your incredible support we reached #5 in the ARIA charts, ahead of ABBA, Mariah Carey and Michael Bublé.

“We did it!” the NGO writes on its website, “Thanks to your incredible support we reached #5 in the ARIA charts, ahead of ABBA, Mariah Carey and Michael Bublé.”

Saving what could soon be lost

The album’s opening track celebrates the “incredible diversity of the Australian soundscape”, showing what there is to lose without serious conservation efforts.

“While this campaign is fun, there's a serious side to what we're doing, and it's been heartening to see bird enthusiasts showing governments and businesses that Australians care about these important birds,” BirdLife Australia CEO Paul Sullivan told The Music Network.

He added that the recordings were very special with some species on the brink of extinction if they aren’t protected.

One such species featured on the album is the regent honeyeater. So few of these rare birds are left in the wild that they are forgetting their mating calls. A study from earlier this year found that with just a few hundred regent honeyeaters surviving, male chicks are starting to mimic the songs of other birds.

This “loss of vocal culture” could make it more difficult for this already at-risk species to find a mate.

Proceeds from the sale of Songs of Disappearance will go towards Birdlife Australia’s efforts to save these endangered bird species.