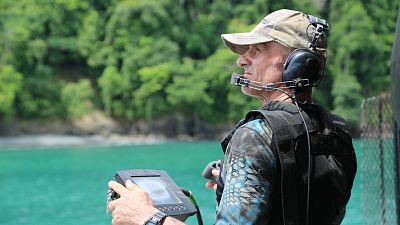 Captain Pete Bethune and his crew are with three armed rangers from MINAE, the Ministry of Environment and Energy in Costa Rica. They are in a 4.7-metre inflatable zodiac boat racing towards a yacht which is illegally fishing near Cano Island, a biological marine reserve.

Using a $4 million (€3,400,00) drone, Bethune has gathered footage of the unlawful fishing activity, prior to boarding the yacht. He says recording evidence can be especially effective when offenders refute the violations.

But when he and his team get there, the captain of the American vessel pleads ignorance, claiming no knowledge Cano Island was off limits for fishing. He is let go with a warning, although the rangers have jurisdiction to make an arrest or confiscate the gear or boat.

“We don't want to put people in prison, we just want them to stop. Once they realise they are being inspected by drones, word gets around, and we see fewer people taking these chances,” says Bethune.

Who is Pete Bethune and what is his mission?

Bethune is living and working onboard a 43.2-metre, 1944 US Navy ship. He has refitted it for the drone which requires a 10x10 metre landing pad, and the other equipment he uses in his work with Earthrace Conservation, a non-profit organisation he founded to save animals and habitats worldwide.

He undertakes missions globally, always partnering with local authorities like MINAE, the institution responsible for the welfare of Costa Rica’s national parks and wildlife refuges.

The Modoc has been anchored in Golfito Bay since January 2020. With the onset of COVID, Bethune was invited to remain in port by Carlos Manual Rodriguez, the country’s former Environment and Energy Minister, to assist with their fishery and jungle patrols.

He met Rodriguez in 2013 when he was in Costa Rica filming episodes for a television show called The Operatives. It aired in 90 countries and followed his team of military veterans and civilian specialists apprehending environmental criminals.

How does his work aim to stop illegal activity?

Bethune signed a €0 agreement, so he offers his services with illegal fishing, poaching, gold mining, logging and farming, as a volunteer. He provides the use of his ship, two small inflatable vessels, a K9 tracking unit, the drone, food and onboard housing for the rangers, and fuel.

This collaboration gives the national park authority access to technology and resources they wouldn’t have otherwise.

“There is no way Costa Rica could justify a $4 million drone for patrols. The drone is sponsored by Scheibel, the manufacturer, so it doesn't cost me anything. With it I can provide an extremely valuable service,” says Bethune.

Dogs and technology are changing conservation

Bethune and his team work with the drone, camera and acoustic traps, and a Belgian Malinois dog trained for tracking and anti-poaching by the organisation “Animals Saving Animals”.

Historically, national parks were patrolled by men on foot carrying firearms, so these tools are game changers when it comes to locating lawbreakers within a vast jungle. The cameras are donated by the US Embassy for use in the Corcovado National Park to surveil drug trafficking, but they also work well for gathering conservation intelligence, so it has become a joint effort.

Alongside illegal fishing, the number one illegal activity in the Corcovado is gold mining. It erodes the creek beds and impacts wildlife. The miners use toxic chemicals like cyanide and mercury to separate the gold from the silt and start shooting the protected animals after the food they carried in, runs out.

“Often the most dangerous time is when you first come across a poacher. They are likely to pull a gun, a knife, or a machete, but the dog generally calms things down.”

“We've got people cutting trees and dragging them out. Others chop them down to build houses and start living and hunting in the park,” Bethune says.

The cameras are set up throughout the jungle and when a trap is triggered, the images appear on a computer at the ranger station and onboard the ship when networked, providing real time data. The team then decides to keep monitoring the situation or head into the Corcovado with the tracking dog which is also trained to physically hold a suspect.

“Often the most dangerous time is when you first come across a poacher. They are likely to pull a gun, a knife, or a machete, but the dog generally calms things down. They don’t know what the behaviour of the dog will be. They might be prepared to take on a ranger - but not a dog,” explains Bethune.

Many people also get caught when the drone picks up a heat signature from campfires in areas where no camping is allowed, and within parts of the park reserved for animals.

The acoustic traps were purchased by OSA Conservation and donated to Earthrace. They pick up audio from gunshots, generators, vehicles etc, within a three-kilometre range to pinpoint the position of the activity more accurately.

When the rangers go in, they know where to begin their search.

A cause worth dying for

Bethune’s entrée into conservation was in 2006. After selling his house in New Zealand, he designed and built a high-tech boat powered solely by biodiesel to prove its viability as an alternative fuel source. Earthrace broke the world record for a circumnavigation with biofuel in 2008, visited 186 cities and hosted tours for over 250,000 people. But Bethune became disillusioned as forests and habitats were destroyed to plant palm trees to produce palm oil used in biofuel.

In 2009, he partnered with Sea Shepherd Conservation Society. Earthrace was purchased by conservationist Ady Gil with the stipulation that Bethune captain the ship in Antarctica to protest Japanese whaling. The vessel was rammed by the Japanese boat, Shonan Maru 2, and scuttled. Bethune boarded the Shonan Maru 2 to present the captain with a bill for the damage but was arrested and jailed in a Japanese prison.

Bethune’s arrest gained media attention, changing the whaling narrative. The Japanese were ordered to cease whaling in Antarctica by the International Court of Justice in the Hague.

While the experience was horrific, it didn’t change Bethune’s mind about conservation work, as dangerous and unpredictable as it is. Since then, he has run campaigns worldwide, saving seals from clubbings in Namibia, closing 2 smuggling rings of forest turtles and pangolins in Asia, stopping illegal fishing in Palawan and recusing pink dolphins from being killed for meat in the Peruvian Amazon.

He has even gone on to save endangered red monkeys from the illegal pet trade in the Amazon, shutting down two gold mining operations in Costa Rica - all while dodging bullets, being nearly stabbed to death and almost dying from a snakebite.

“Our campaigns take us to difficult places. We take on criminal gangs that are morally bankrupt with deep pockets. But this is the cause we choose to fight for, and we know the risks. You haven’t lived until you’ve found a cause worth dying for.

“My cause is saving wildlife. I know one day it may take my life. I am OK with that. My life has real meaning,” Bethune concludes.