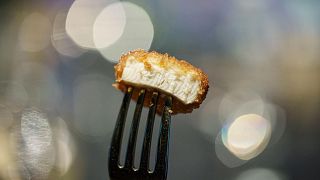 A nugget made from lab-grown chicken meat is seen during a media presentation in Singapore, the first country to allow the sale of cultivated meat.   -   Copyright  Nicholas YEO / AFP
By Euronews Green  •  Updated: 31/01/2022

China has included cultivated meat and other “future foods” in its five year agricultural plan for the first time ever. As one of the biggest consumers of meat and eggs in the world, it could be a sign of things to come.

Created using stem cells that are fed a nutrient-rich broth, cultivated meat could help replace farms and slaughterhouses with labs. Producing it on a scale large enough to make a difference, however, has so far proved difficult.

In September last year, Singapore became the only country in the world where lab-grown meat was officially approved for sale. The inclusion of cultivated meat in China’s Ministry of Agriculture and Rural Affairs blueprint for the future of food looks set to change that.

According to Mirte Gosker, acting managing director of The Good Food Institute APAC, it is internationally significant that China has included this “game-changing” new technology in the plan. It shows that they plan to invest in the scientific research around cultivated meat just like they already have done for clean energy.

“Other nations would be wise to follow China’s example by investing in this smarter way of making meat before they get left behind,” she told Vegeconomist.

Appealing to the 'discerning palates' of consumers

The World Resources Institute predicts that global demand for meat could be set to almost double by 2050 and meat consumption is on the up in China. But food security is also a growing concern for the country’s 1.4 billion-strong population.

Cattle alone contributed almost 30 per cent of China’s agricultural emissions in 2014, the last year for which data is available. As the biggest source of greenhouse gases in the world, the country is now under pressure to find ways to reduce its impact on the planet and reducing meat consumption could help.

But, according to The Good Food Institute, plant-based alternatives are not popular in the country. The organisation says that they don’t meet expectations for taste or texture with more investment needed in products that “can appeal to Chinese consumers’ famously discerning palates.”

That’s where cultivated meats come in with evidence to suggest that Chinese consumers would be more accepting of this alternative form of protein. According to recent market research, almost 90 per cent said they would be open to giving it a try.