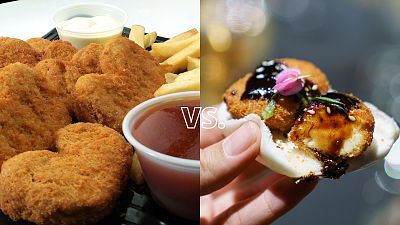 The world's first lab-grown chicken nuggets are being served in a restaurant in Singapore.

Manufactured by US start-up Eat Just, the nuggets passed their safety review led by the Singapore Food Agency in early December last year. A few days later, the first samples were served in a private members club called restaurant 1880 for around $23 (€19).

This is the first time approval has been granted for the sale of meat created without slaughtering any animals - and it's raised the bar in the meat substitute industry.

He adds that the product is "creating the opportunity to feed the world without overwhelming the planet".

Usually, meat production processes are heavily environmentally destructive. When you count the deforestation involved for rearing livestock, the methane (a greenhouse gas) they then generate and the amount of water needed to turn the animal into a piece of meat ready for human consumption.

Chief executive of food tech company Eat Just, Josh Tetrick, says that the launch "moves us closer to a world where the majority of meat we eat will not require tearing down a single forest, displacing a single animal's habitat or using a single drop of antibiotics".

But some were less thrilled by the idea of lab-grown chicken.

"I think that people should lean more towards vegetarianism, veganism more than trying to replicate things in a lab," says Catherine, a homemaker living in Singapore.

"I think it's better to stay with natural products and plant-based products, than trying to play god in a petri dish."

Demand for sustainable meat alternatives has been steadily rising due to growing concerns from consumers about both the environment and animal welfare, but other products on the market are plant-based.

That's what makes these nuggets stand out. But, if Singaporeans are anything to go by, convincing people of the idea might take a while.