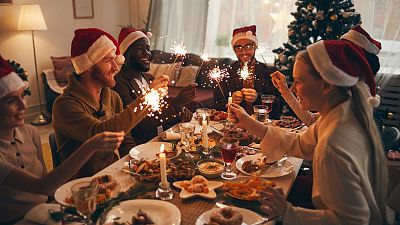 The meal planning phase of Christmas is well and truly underway, and starting early lays the foundations for sustainable food and festivities.

One man who has weighed up the most ethical dinner options is Cornish chef and sustainability expert James Strawbridge.

It’s not just about perfecting that one meal on the 25th, he says. After last year’s celebrations were curbed by COVID, James predicts there will be multiple roasts this time around, as people gather with various branches of family and friends.

This poses a culinary challenge - but also a chance to get really creative and resourceful with your supplies.

“It’s a really exciting time to think - okay, what can we do beyond turkey that is special?” says James.

“That's where looking at meat alternatives or just going down the veg route and doing a real star of the show veg roast pays off.”

So what are the best ways of lowering your carbon footprint in the kitchen this Christmas, while still dazzling your guests?

Start by staying local - and cutting down food miles

It’s an obvious tenet of sustainable dining (and living), but buying local is key. “For me the first thing is gradually breaking that habit of buying an awful lot of exotic fruit from abroad,” says James.

Tapping into regional food is a great way of making this fun, rather than limiting. On the Cornish coast that might involve using seaside vegetables, even foraging for them - but do this with care, as taking plants’ last shoots could scupper them for spring.

“My Dad [Escape to the Chateau’s Dick Strawbridge] lives in France, so I love France,” says James, “But rather than getting a French Brie, could we get a British Brie from Somerset? Just to save those food miles and support British business.”

Finding the next big thing through artisan suppliers

Visiting your local Christmas market is a great first port of call for finding artisan suppliers.

Companies like 44 Foods - an online British grocery store - do the hard work of tracking down the best produce from farmers around the country. “They’re a bit like the British Etsy of cheese,” says James, who’s partnered with them.

“As soon as you get the bug of searching for these people it becomes quite addictive because you're always looking out for the next small startup who’s doing something really special,” he says.

“Ultimately the way of food business is retailers will homogenise and gradually make success stories out of some of these brands who then grow, and that's great, but it's always very exciting finding them before they become super mainstream - like finding random vinyl from bands.”

Full disclosure: I tried 44 Food’s Vegetarian Christmas Bundle at home and it was delicious. A selection of high quality veg came with a Sgaia vegan garlic and rosemary roast that was easy to slice up and fry, providing a hearty wheat gluten centrepiece.

Getting fancy with the vegetables

Falling back in love with winter root vegetables will pay dividends round the table. It’s also a great way of opening up conversations about sustainability - and more.

Talking vegetables unlocks a world of flavour for James, who suggests adding a little bit of honey to a roasting tray to win over sweet-toothed family members.

Overcooked boiled sprouts are a lingering memory for many, but glazing them, or roasting sprouts in citrus makes for a far more appealing sidedish.

It’s all about “demystifying and empowering people to learn to cook vegetables” says James - and naturally he recommends his own recipe book, The Complete Vegetable Cookbook: A seasonal, zero-waste guide to cooking with vegetables as a handy place to start.

Three vegetarian show-stoppers James recommends to get your taste-buds tingling are:

Sticking with Turkey? You can still lower your carbon foodprint

There’s no doubt that vegetarian Christmas dinners have the lowest environmental impact. But if you aren’t a meat-free household, there’s still a whole spectrum of sustainability to explore.

According to Alliance Online, a high-carbon Christmas dinner - including pigs in blankets and beef dripping - adds up to 1.56kg of CO2 emissions per plate - almost 10kg for a family of six.

Forgoing pork, beef and other meats to focus on the turkey could reduce your carbon footprint by as much as 39.1kg of carbon emissions.

And for those set on a traditional dinner, James stresses the importance of choosing a higher welfare turkey.

How can we aim for zero waste around Christmas?

It comes back to planning - even micromanaging for the sustainability expert. While that might not sound very “Christmassy”, you’ll certainly appreciate it come Boxing Day.

“There’s nothing wrong with living off cheese and wine,” says James, “but it's pretty cool as well to think what can I do with my leftovers that will allow us to live in that little Christmas bauble for longer than a couple of days.”

Jazzy sprout dishes with lemon and eggs, or turkey reuben sandwiches are some recipes you could use to stop leftover food going to waste.

How to involve children in sustainable Christmas dinners

Recruiting some little helpers in the kitchen at Christmas is the ideal time to get them interested in food and its associated issues.

“Children always ask ‘why’ - it’s annoying how curious they are,” says James, “so all you’ve got to do is expose them to food in the kitchen. Including the shopping process - let them see how much it costs if you are choosing to buy organic veg; there’s a price difference, but why is that?”

You can also kit your kids out with specially designed chef’s knives (James designed a set with his daughter), and some mini chef’s whites or their own-sized apron.

If you have children who do eat meat or fish, he advises buying the whole thing rather than a pre-packaged portion, and breaking it down with them.

“The more they understand, the more they will make better decisions than us as they grow up.”