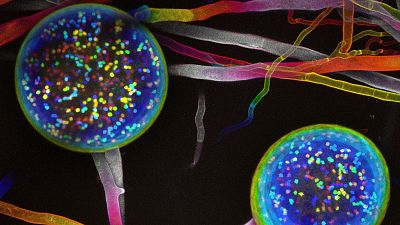 Underground fungal networks span half the width of the Milky Way - and we’re one step closer to understanding them thanks to a major new mapping project.

The Society for the Protection of Underground Networks (SPUN) launched this week with the aim of documenting and protecting these networks, described as the “coral reefs of the soil” because of how much biodiversity they support.

A first of its kind enterprise, SPUN’s scientists will begin collecting 10,000 samples from 10 hotspots around the world next year, starting in Patagonia.

Dutch-based co-founders Dr Toby Kiers and Dr Colin Averill are working on the same issue, but at very different scales.. While Toby is putting fungal networks under the microscope, Colin is exploring forest microbiomes; both are asking how fungi can help solve some of the biggest problems we’re facing today.

Soil is the second biggest carbon sink in the world, after oceans. It stores CO2 through the mycorrhizal fungi that lace through the roots of plants, providing nutrients while drawing down the atmosphere-warming gas.

We tend to think of soil as dead, inanimate dirt - something that plants sit in - but really it’s teeming with microbial activity. A handful of soil has well over 100 kilometres of fungal hyphae running through it - the tubular cell structures that make up the tangle of mycelium, says Colin.

He first encountered the wonders of mycorrhizal fungi when working in carbon cycle science, and realised they were being overlooked. Once you notice them, “you start to ask fundamentally different questions,” he tells Euronews Green.

“We started doing analyses asking, do trees have the capability of partnering with similar sets of fungi - does that allow them to support other trees and keep them alive under drought conditions in a way they wouldn’t otherwise?

“I wouldn’t have asked that question if I hadn’t thought of mycorrhizal fungi. It’s completely changed my science and how I understand how forests and all ecosystems operate.”

“It’s like an ancient life support system that you are walking on.”

Toby’s interest was sparked earlier, while living in the Panama rainforest aged 19. “It changed everything,” she says, “There’s living nutrients coursing through the ground. You have a totally new respect for these flows and structures that you can’t see with the naked eye.

“It’s like an ancient life support system that you are walking on.”

By mapping the vast fungal networks around the globe, SPUN is seeking to build something that we can all consult to find out about the earth beneath us, within two years.

This global atlas is also intended to spur conservation efforts, as hotspots of mycorrhizal fungi are under increasing threat from agriculture, urbanisation, pollution, water scarcity and climate change.

We sat down with SPUN to find out more about how this extraordinary project will work, and what the planet-changing potential could be.

Growing the next generation of “myco-nauts”

For SPUN, mapping the world’s fungal networks means first connecting a distributed network of humans. A new start-up comprising scientists from the Netherlands, France, the UK, Germany, Canada, the US, they’re looking far beyond their own team to find sample soils.

Conscious that some global biodiversity studies have adopted a “colonialist” model in the past, Colin says “we want to make sure that the people who measure and own this data are actually the people who are from these places.”

Ten hotspots have been identified from existing studies and AI technology, including: the Canadian tundra; the Mexican plateau; high altitudes in South America; Morocco; the western Sahara; Israel’s Negev desert; the steppes of Kazakhstan; the grasslands and high plains of Tibet; and the Russian taiga.

The method itself is simple, with local communities taking soil samples from as little as 2cm below the surface within a certain area and air-drying them. SPUN arranges for the samples to be transported to local researchers, who will then extract the DNA in sequence, before storing it in ultra cold freezers.

SPUN are looking to grow the next generation of “myco-nauts” - with ‘myco’ meaning fungus and ‘naut’ explorer.

What can the flows inside mycorrhizal networks tell us?

Back in the lab at Vrije University in Amsterdam, Toby will continue looking closely at the flow of nutrients within fungal networks, seeing how they change under different conditions.

Linking the identity of fungal communities to their functions is a vital step. The fungi kingdom is vast, encompassing everything from pathogens to mushrooms - the fruiting bodies of fungi, where spores are produced. Whether mycorrhizal fungi belong to different ‘species’ is an ongoing discussion, says Toby, as they can fuse together and do “crazy genetic things”.

But categorising them - and discovering which are the best at sequestering carbon, which at recycling nutrients - has far-reaching implications. With up to half of all living biomass in soil made up of these fungal networks, any change to their behaviour (or existence) will impact the whole ecosystem.

Some subsets of fungal communities may even be able to enhance plant nutrient capture - and so reduce the need for harmful chemical fertilisers, Colin adds. Ultimately, the co-founders are wanting to “marry” the micro and macro scales at which they work.

In a recent study, Colin’s team sequenced the DNA of hundreds of forest plots in Europe. “We identified fungi linked to threefold variation in tree growth that couldn’t be explained by the environment and other factors that we usually use to model tree growth,” he says.

Such discoveries open up some exciting possibilities. As well as protecting imperilled fungal networks, SPUN is looking at introducing hardy fungi into places where they’re needed.

It’s a surprisingly low-tech process: literally taking live soil from intact ecosystems and transplanting it to degraded places. This reinvigoration of the soil has already had “remarkable success” in Scandinavia, says Colin, in the grasslands of the American Midwest, and the ex-mining landscapes of Estonia.

Whereas identifying high performing plant species has, in the past, led to a process of selection in which fields are whittled down to the point of monoculture, Colin sees “an opportunity to go precisely the other way below ground.

“Can we make our managed landscapes reservoirs, rather than deserts, of biodiversity,” he asks?

While we won’t know the answer for several years, mapping the fungal biodiversity we have now is an important first step. It’s hard to value what you can’t see, and SPUN’s stunning visualisations are a light in the fertile dark.