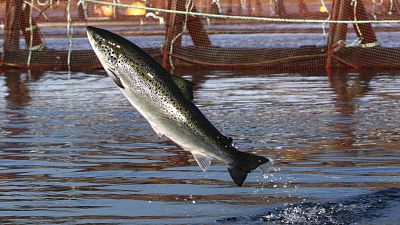 ‘Scottish smoked salmon’ - three words which are synonymous with Christmas for many people. In recent years, a fourth word 'sustainable' has often been added to the packaging, but is it deserving of this label?

The foodstuff has been marketed into a myth, conjuring up images of mist-soaked sea lochs and babbling burns. Scotland is still this beautiful of course, but the fish on your plate never did much leaping upstream.

If you’ve visited the Highlands and Islands and spotted a fish farm hovering on the loch’s surface, a kind of reverse spell is at work - the idea that these discrete circles are a sleek portal to another world: the supermarket.

The reality, as those who live up close know, is far messier, crueller, and can be dangerous.

It’s a reasonable instinct to want some salmon on your Christmas table. Like a satsuma in a stocking, a side of sprouts or a box of chocolates, a smoked salmon breakfast is one tradition passed down in many households across Europe.

But for such a clearly packaged export, do you really know where salmon comes from?

Salmon are ‘gasping themselves to death’ from disease

Marine biologist David Ainsley was taking a boat full of tourists round Loch Shuna on one of his wildlife trips two summers ago, when they noticed a colossal stink coming from a fish farm.

Steering the boat closer, he could see a barge with a JCB-like scoop on an arm - reaching into the open-net cage and scooping up mounds of dead fish.

An experienced diver, the 64-year-old decided to investigate what was really going on with the salmon. That night, he returned to the farm and - after “a game of cat and mouse” with the fish farm boat - jumped into the water.

“I’m not an emotional person, at all,” he says, “but I came down and there were just hundreds of healthy-looking salmon gasping themselves to death on the side of the cages.”

Gill disease was the problem here, and it was far from an isolated incident. Open-net cage farming means that whatever goes into the water - salmon faeces, nitrogen excreted through their gills, chemicals used to treat diseases - seeps into the whole marine ecosystem.

Fish farming is the biggest polluter of the sea in Scotland

Chemical seas: the use of pesticides in Scottish salmon farming

As the Scottish salmon industry grew into its current form - mostly owned by a few Norwegian companies - a rule called the ‘allowable zone of effect’ (AZE) loosened too, explains Ainsley.

This idea that only a limited area around the cages is affected by pollution has been disproven by a number of scientific studies over the years.

Sea lice are ectoparasites - feeding on the tissue and blood of host fish - and they’re a huge problem in salmon farming.

Sea lice are ectoparasites - feeding on the tissue and blood of host fish - and they’re a huge problem in salmon farming. The industry tackles it by chucking chemicals into the cages, but the lice have developed resistance over time, leading companies to use higher and higher quantities of insecticides like emamectin benzoate.

In 2016, a study by the Scottish Association for Marine Science (SAMS) found that emamectin was causing “substantial, widescale” reductions in crabs and lobsters. But it was published within a second report that rubbished its findings. It emerged that this take-down was written by reviewers with links to the US drug manufacturer Merck.

The Scottish Environment Protection Agency (SEPA) knew about the company’s involvement, but was overruled by the government and salmon industry officials, The Sunday Herald reported. It’s one of many instances that have led campaigners to describe the regulator as “toothless”. And emamectin is still being used in high quantities by fish farms.

Another 75 kg poured into a cage Saturday 29th August 2020. respirator worn by the employee. north Easterly wind so the blinding headaches will start soon.. (or we have to leave our home ! ) Total Formaldehyde used in 9 days 1225 kg. How is this acceptable pic.twitter.com/ZgY1VAcT7r

Locals have also complained of “blinding headaches” caused by the heavy use of formaldehyde to treat salmon disease and parasites.

SEPA audited the Kames fish farm at Loch Tralaig and found no evidence that it had breached its license conditions with regard to formaldehyde.

A spokesperson for the regulator told Euronews Green, “The long-term trend has been for reduced reliance on medicine treatments and we’ll continue to work with the sector on innovation in containment, alternatives to medicine use and site relocation – with progress being made in each of these areas.”

“I feel like the witness who’s seen a crime”

The industrial farming of salmon has hurt Scotland’s magnificent wildlife in various ways. Inshore sea lochs are important calving areas for porpoises, sheltered spots where dolphins used to travel too. Ainsley has seen less of the cetaceans in areas where acoustic deterrent devices (ADDs) were used by companies to drive away seals from the nets.

Wild salmon suffer too of course, especially when diseased populations escape and mingle with their highly-evolved kin. A half-a-million strong farm which came adrift during a storm last year, was “the ecological equivalent of an oil tanker running aground” for wild salmon, wrote campaigner Corin Smith.

“Scottish wildlife, under and above the water has been my life,” says Ainsley, who started diving in 1976. “I’ve dived well over 4,000 dives through the time when we’ve done more damage to our seas than in the whole of history. And very few people have dived under fish farms. So I feel like the witness who’s seen a crime and feels responsible to do something about it.”

Aitchison, who has filmed the likes of the BBC’s Planet Earth series, says that Atlantic salmon compares to the iconic wild animals he has seen all over the world.

Climate change is also impacting cold water fish like salmon, he explains, but it can’t be controlled quickly enough to protect the species. “We could control the impacts of sea lice and disease on wild salmon here. And we’re not doing it anywhere near as wholeheartedly as we should.”

The good news is that a major recovery effort is underway in Scotland’s waters. Community-led charity Seawilding is one such group that has the country’s native species at heart. At Loch Craignish, Danny Renton and co have launched a project to reintroduce 1 million oysters - incredible ecosystem engineers that are able to clean almost 40 gallons of seawater a day.

The community are also planting fields of seagrass - you can even get involved from afar by gifting someone a square metre for £20 (€24).

Scotland doesn’t have a monopoly on dirty salmon farming. It’s been called the “battery-hen farming of the sea” as far away as Tasmania too.

Christmas traditions like Turkey and salmon meals put a huge amount of pressure on relatively few species, and can incentivise irresponsible farming. So broadening your fish options is a good place to start for pescetarians and carnivores. Sardines and mackerel have the oily taste we prize in salmon.

For vegetarians and vegans, there are plenty of alternatives that still put a pop of orange on the table.

Ribbons of brined carrot make a great topping with cream ‘cheese’ on bagels or blinis, and even watermelon can give the right texture after roasting.

"We want to leave something for the next generation - that's the whole meaning of sustainability," says Ainsley.