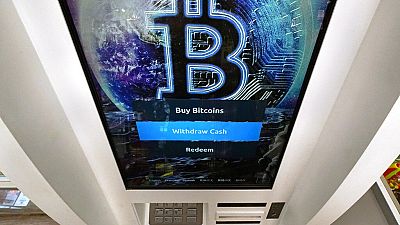 Bitcoin logo appears on the display screen of a cryptocurrency ATM at the Smoker's Choice store in Salem, N.H.   -   Copyright  Charles Krupa/Copyright 2021 The Associated Press. All rights reserved.
By Rosie Frost  •  Updated: 20/11/2021

The rise of cryptocurrencies could disproportionately impact those most vulnerable to the climate crisis, a new paper has found.

The digital infrastructure behind the most popular cryptocurrency, Bitcoin, requires as much energy as the whole of Thailand. Its carbon footprint is now larger than the gold mining industry, growing from 22 megatonnes of CO2 equivalents two years ago to 90 megatonnes a year in 2021.

This growing footprint alongside its economic and environmental impacts is putting communities on the frontlines of climate change at risk, argue Peter Howson from Northumbria University and Alex de Vries from Digiconomist.

Their new paper “looks at the disproportionate impact that those activities are having on the world's poorest rather than those who are participating in the sort of Bitcoin speculation mainly in the Global North.”

“The Global South predominantly is going to be the place that has the least resilience,” Howson tells Euronews Green.

How many people use cryptocurrencies?

For every $1 (€0.88)of value that Bitcoin generates, around $0.49 (€0.43) needs to be spent remedying environmental and public health issues linked to its energy use. And while around 100 million people have dabbled in cryptocurrencies since they were created, the number of people actively using them is relatively small.

“We’re only talking about 20 million active users,” Howson explains. “If we were all using this technology, then perhaps you could justify such a massive carbon footprint.”

The number of people regularly using Bitcoin is around the same as the population of the city of Jakarta - less than 1 per cent of people on the planet. Comparing it to other financial systems, Howson says it is a “steam engine and we have Tesla’s now.”

Comparing it to other financial systems, Howson says it is a “steam engine and we have Tesla’s now.”

And those transactions are also using energy that is needed by vulnerable communities. Howson provides the example of the Navajo people in New Mexico, US, where Bitcoin mining is consuming enough energy each month to power around 19,600 homes.

There are other examples too of miners coming in to take advantage of conflict situations, he says, “we can think of these in the same way as we think of conflict diamonds.”

“Bitcoin miners head towards these disputed places where resources are being fought over and I've called this in my research, crypto colonialism.”

Can we solve the problem?

The paper also puts forward a number of solutions to curb the environmental impact of cryptocurrencies. It says that implementing restrictions on mining them would prove an “easy win” in progressing global sustainable development goals and UN climate change goals.

“We've had voluntary market solutions for some time. So these are the Crypto Climate Accord, which is backed by the UN, and the Bitcoin Mining Council, both of which are not working,” Howson says. But, he adds, bans on proof of work mining could offer a solution.

A global coordinated ban on proof of work cryptocurrency is really the only means by which we can rein it in on a decent sort of timescale.

Some countries are already looking into this - including Sweden and Norway in Europe. China recently made cryptocurrency transactions illegal but mining has shifted to the neighbouring country of Kazakhstan.

Howson says this shows the need for a coordinated global ban to really tackle the problem.

“Having reviewed all of the different policy options, a global coordinated ban on proof of work cryptocurrency is really the only means by which we can rein it in on a decent sort of timescale.”