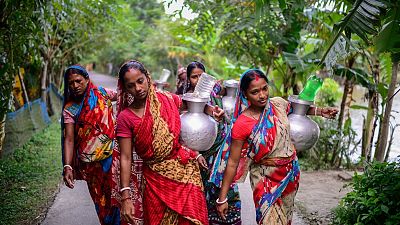 In the time it takes world leaders to agree on climate action at COP26, women in developing countries will miss out the equivalent of 2.5 million working days due to a lack of clean water.

For much of humanity, the climate crisis manifests as a water crisis - worsening as bodies of water dry up, become flooded or polluted. WaterAid is calling on world leaders to meet their $100 billion (€86.4 billion) climate pledge sooner than the delayed 2023 date, in order to provide solutions.

Women and girls in poorer countries are typically responsible for collecting water. With a dearth of basic water services in rural areas, they’re having to walk longer hours to provide for their families, leaving them little time to study or work.

For WaterAid UK CEO Tim Wainwright, “the simple act of filling up a 20-litre can of water, and walking with it for two kilometres - which is what many women around the world do every day - and just imagin[ing] what it’s like if that’s part of your life” would help others to understand the depth of the issue.

Based on the WHO’s estimate that 50 litres of water are needed per person per day to meet basic drinking, cooking and washing needs, the charity calculates that a woman in this position with a family of four spends five hours a day just fetching water.

A woman in this position, with a family of four, spends five hours a day just fetching water.

That adds up to 60 hours during the 12 days of COP26, or 20 per cent of the summit. In total, basic water services could save women 77 million working days a year, the charity finds.

As the global temperature rises, women in water-stressed countries are having to make longer journeys to access safe water - giving them less time to adapt at home in what Wainwright calls “a vicious circle.”

Why finance flows are needed to solve the water crisis

Speaking to Euronews Green at COP26, Wainwright welcomed the presence of a ‘water pavilion’ for the first time at the summit to discuss such issues. But more action is needed, he explains, action in the form of finance from both the public and private sector.

Weeks before COP, richer countries admitted they wouldn’t meet the $100 billion (€86.4 billion) a year promised in 2009 until 2023 - three years late. Only 80 per cent is being delivered so far, the latest data shows, and around a quarter of that is going towards helping communities adapt - a proportion that WaterAid says should be at least half.

Water programmes receive less than 3 per cent of all tracked global finance, the charity says.

“Water is complicated,” explains Wainwright, “because although it’s something that every individual needs, the interventions that are necessary to secure water need to go across the whole water system.”

In part, this is because liquid maps cut across national boundaries; protecting the whole ecosystem can be a conflicted process, even before ensuring water reaches the people, agriculture and industry who need it most.

What is the ‘Resilient Water Accelerator’?

To “unblock the financing gap” WaterAid is working with governments, businesses, banks and others to increase funding for the most climate-vulnerable countries. Entitled the Resilient Water Accelerator, this coalition - launched by the UK’s Prince Charles in March 2021 - aims to reach 50 million people in water-stressed areas by 2030.

Blended finance is the way to do this, explains Wainwright: an initial investment of $20 million (€17.3 billion) is expected to attract more money from the private sector, to the tune of $600 million (€518 million) in the next few years.

Six locations in Africa and South East Asia are currently being scoped out for projects bringing water, sanitation and hygiene facilities together, and incorporating nature-based solutions.

Protecting water is an animating fight for communities around the world, often weighed against the extractive interests of fossil fuel companies. Or loose regulation, as the ongoing battle against sewage in the UK’s waterways shows.

Women are leading this resistance from the frontlines, and innovating in water-stressed areas. In the drought-prone Indian state of Gujarat, female farmers are managing Bhungroo, a water management system that cleverly stores rainfall underground for use in dry spells.

As one of the most essential components of life, is it any wonder that clean water is so fiercely defended?

Water is a very important part of our spiritual lives, and the thought that somebody doesn’t have it goes deep.

“Water is a central part of all of the world’s major religions,” says Wainwright, “it’s a very important part of our spiritual lives, and the thought that somebody doesn’t have it goes deep.

“It’s why I get up in the morning and come to work. I think it matters, and would call on all the people at COP26 to - yes, slow down climate change - but think about what’s already happening in the very poorest parts of the world.”