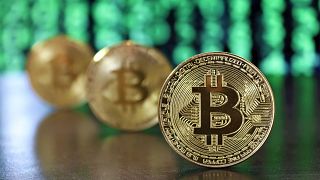 Renewables could become big for Bitcoin when looking to the future of the cryptocurrency.   -   Copyright  Canva
By Rosie Frost  •  Updated: 07/06/2022

_This article was originally published in March 2021. For COP26’s finance day, we’re sharing the best of our related content.
_

In March of this year, electric car company Tesla announced that it had bought €1.2 billion of the cryptocurrency, Bitcoin.

It simultaneously became the first major car manufacturer to take payments for its products using the cryptocurrency [although this scheme was cancelled in May]. It was a big investment for the company, which said it wanted “more flexibility to further diversify and maximise returns”.

The value of the digital asset surged, reaching a high of nearly €48,000 per coin. But it then subsequently tumbled leaving many investors out of pocket, with much of its volatility based on the speculation of Tesla founder, Elon Musk’s tweets.

With announcements that its value had reached an all-time high, however, came concerns that the electricity consumption of the cryptocurrency was getting out of hand. As prices increased, so did the energy it used up.

The potential for Bitcoin’s carbon footprint to increase grew astronomically.

Musk isn't the only tech billionaire to have dived into the world of cryptocurrencies, either. In a recent interview with the New York Times, Bill Gates said that Bitcoin "uses more electricity per transaction than any other method known to mankind". The Billionaire philanthropist called himself a "bitcoin sceptic" saying "it's not a great climate thing".

Some estimates state that every year, the cryptocurrency alone could emit around the same amount of carbon dioxide as New Zealand. For many, it has called into question the environmental credentials of companies that choose to invest, but are there alternatives that could turn this virtual currency green?

How does Bitcoin mining work and why does it consume energy?

Bitcoin ‘miners’ use highly specialised computers, connected to the cryptocurrency network to solve complex mathematical puzzles. This process verifies transactions, preventing the global record from being edited fraudulently. As a reward, these miners occasionally receive a small amount of Bitcoin.

Since it was created in 2009, Bitcoin mining has become a lucrative business. But, as the rewards are a bit like a lottery, you need a lot of computers to make it profitable. Massive warehouses around the world filled with specialised machines run round the clock and, as you might expect, these consume large amounts of energy.

So much so that in the last few years, the cryptocurrency has grown to consume more energy than the Netherlands, Argentina or Switzerland.

The cryptocurrency has grown to consume more energy than the Netherlands, Argentina or Switzerland.

The Cambridge Bitcoin Electricity Consumption Index tracks the energy usage of mining operations based on varying levels of efficiency around the world and the demand on the cryptocurrency’s network at any one time.

The team behind the tracker say that Bitcoin needs to be inefficient in order to be secure. If mining were efficient then it would be easy for a “single entity or colluding group of actors to dominate the network”.

With efficiency out the window, to be cost-effective, mining operations are often located where energy is cheap. There’s profit to be made when electricity costs less and Bitcoin’s value is high. That has meant that in the past, miners have often taken advantage of inexpensive coal power in countries like China.

As Bitcoin has grown, the amount of computational power being used to mine is thought to have more than doubled over the last year. Some estimate that Tesla’s purchase alone caused it to increase by 6 per cent, likely resulting in its energy consumption jumping by the same amount.

Critics of the electric car giant’s investment have said that this potential jump in carbon emissions from electricity use could wipe out its environmental efforts.

But - the future of Bitcoin doesn’t have to be in cheap, dirty energy.

What about using renewable energy?

“It's important to understand that energy consumption is not necessarily equivalent to carbon dioxide emissions and environmental pollution,” the Cambridge team says on its website.

“For instance, one kilowatt-hour (kWh) of electricity generated by a coal-fired power station has a substantially different environmental footprint than one kWh of electricity produced by a solar park.”

In October, a report from the Cambridge Centre for Alternative Finance estimated that on average nearly 40 per cent of the total energy used by cryptocurrencies’ complex calculations came from renewable sources. 76 per cent of all miners were using renewables as part of their energy mix.

This was a more than 10 per cent increase from 2018 and hydroelectric is now one of the most common sources of energy for miners.

"The huge and ever-growing amount of energy needed to run Bitcoin is largely down to the particular technology used to maintain this digital currency, but it also points to a wider challenge for the future of the internet," says Greenpeace USA Media director, Travis Nichols.

The environmental organisation started accepting Bitcoin for donations in the US around six years ago. It says it doesn't hold any of the cryptocurrency but uses a third-party processor to instantly change it into US Dollars.

The internet has the potential to serve as a critical foundation for sustainable economic growth, but its expansion needs to be powered by clean energy sources.

"The problem is that, at the moment, only about a fifth of the electricity used in the world’s data centers comes from renewable sources, and that's not good enough," adds Nichols. He says that Greenpeace is focusing efforts on governments and big corporations like Apple, Facebook, Google and Amazon to change electricity grids for all users.

"The internet has the potential to serve as a critical foundation for sustainable economic growth, but its expansion needs to be powered by clean energy sources that help, not hinder the crucial challenge of tackling climate change."

‘It doesn’t make sense to use coal’

One of the world’s biggest cloud based cryptocurrency mining operations is already putting this to the test. Genesis Mining is building its data centres in colder climates where energy sources like geothermal and hydroelectric are abundant.

“First of all, every miner needs cheap power,” says Genesis’s Regional Manager for North America, Tillmann Korb. “And especially in Iceland, and in Sweden, the power is cheap.”

Korb explains that the decentralised nature of cryptocurrencies also means that you can mine them anywhere.

You don’t need a strong internet connection and you could theoretically do it from your phone. Companies like Genesis or even individuals can take advantage of any country that has an excess of cheap renewable energy.

“There is no need to be in a big city. They [miners] are using the over capacities, which are remote and it is not possible to transport the power somewhere else maybe because of missing power lines or so on.”

The flexibility of mining rigs also means that Genesis can stop using electricity whenever they are asked. They can shut down for as little as 20 seconds with no consequences to balance out demand on an electricity grid.

He believes that renewables are the natural future for cryptocurrencies. As Bitcoin’s value increases and the rewards for mining it decrease (a feature that is built into the cryptocurrency as more coins are ‘discovered’) electricity costs have to go down.

“There is more pressure on the cost side, for the miners and for that reason, only renewables can be the power source,” Korb says.

“If you just look at the incentives, it doesn't make too much sense to use coal.”

French government auctions off €28 million worth of Bitcoin