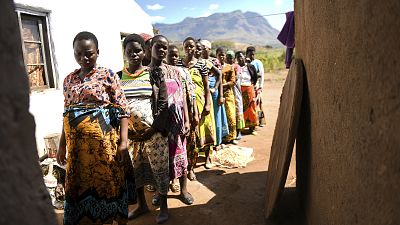 As COP26 continues in Glasgow this week, the focus turns to the effect climate change has on women and girls around the world for ‘Gender Day’ on 9 November.

While climate change affects all countries and all people, it is widely accepted that vulnerable populations – the poor, those with unstable food and housing, and those who rely on agriculture – are more at risk of experiencing the adverse effects of unpredictable weather patterns, less food, unsafe water, and unstable living conditions.

Women and girls already face gender inequality and when disaster strikes, increasingly due to climate change, they are the ones who face unique struggles in the aftermath.

In 2019, the UNDP spent time in Ugandan wetland communities, who depend on agriculture for their livelihoods. As expected, the researchers listened to how climate change had impacted weather patterns, reducing the crops and livestock the communities relied upon.

Surprisingly, they also learned how the changing climate exacerbated violence against women.

Women and girls were forced to make long journeys during seasons of drought to obtain food and water, exposing them to vendors, farmers, and landowners who would sexually assault them.

As the women tired of these arduous trips and increased workloads, they were uninterested in sex with their husbands and some women recounted incidences when their husbands responded to lack of sexual desire with violence.

The research also showed how poor harvests, livestock loss, low incomes and food insecurity put pressure on men as providers, and to cope with their ‘failures’, men often used alcohol and became violent within the home.

When homes are destroyed by hurricanes or cyclones, women are forced to flee to temporary displacement camps, where they are exposed to increased violence from strangers.

Relief Web worked with Sathi, a young 14-year-old girl from Bangladesh, who was forced to move into a displacement camp when her house flooded.

“At night, I cannot sleep,” she says. “There was no door. Just a plastic sheet above our heads. My mother never slept. She was worried for me and my sister.”

For families already living in extreme poverty and insecurity, and lack of education, natural hazards and extreme weather due to climate change may be the tipping point where families feel forced to marry off their daughters for survival.

While the links between climate change and child marriage haven’t been globally researched or evidenced, there have been anecdotal reports where families marry their daughters off to protect their daughters and familial reputations.

“Because of poverty, parents marry off their daughters like me at a very early age,” says Sarmin, a 14-year-old girl in Bangladesh, to Relief Web. “Life is very tough for girls of young age in the village.”

Sarmin’s family lost everything after a series of floods and as a consequence, married her into another family to keep her safe and fed.

As women cope with climate disruptions, it is essential they have access to contraception to avoid further pregnancies amid crises.

However, analysis from MSI Reproductive Choices across 26 climate impacted countries, found that since 2011, an estimated 11.5 million have had their access to contraception disrupted due to climate-related displacement.

Over the next decade, MSI predicts 6.2 million unintended pregnancies, 2.1 million unsafe abortions and 5,800 maternal deaths will occur if the high demand for contraception is not met.

“It's a grave injustice that the women and girls most affected by the climate emergency are those who have contributed the least,” Sanou Gning, regional director of MSI Reproductive Choices, told Euronews Green.

What my teams are hearing, loud and clear from a lot of women living in these vulnerable areas, is that getting pregnant during a crisis is the last thing they want.

“In Senegal where I am from, coastal erosion has forced many families to leave their homes and move into makeshift camps. What my teams are hearing, loud and clear from a lot of women living in these vulnerable areas, is that getting pregnant during a crisis is the last thing they want. It’s vital that we listen to what they are telling us.”

Rohki lives with her family in a fishing community in south Senegal and is facing reduced fishing stocks due to the climate crisis, making her work more difficult. She is aware that becoming pregnant makes the life-saving work nearly impossible.

“As soon as one child was old enough to walk, I was falling pregnant again,” Rohki explains. “This made it hard because when a pirogue (a small fishing boat) landed, you had to run to get the fish. When you’re pregnant or have a child in your arms, you can’t do it.”

When a family is faced with the impact of the climate crisis, girls’ education is one of the first things families drop.

“There is no rain in our community,” says Dawele, a 14-year-old girl from Ethiopia, who was forced to drop out of school following a drought. “We walk for more than 8 hours every day to get water. Because of this, I couldn’t attend class and was forced to drop out. I love mathematics and want to be a teacher, but now I don’t know what my future will be.”

I love mathematics and want to be a teacher, but now I don’t know what my future will be.

In spite of all the benefits of educating girls, Malala Fund estimated that in 2021 climate-related events will prevent at least four million girls in low and lower-middle income countries from completing their education.

If the trend continues, by 2025, climate change will be a contributing factor as to why at least 12.5 million girls won't complete their education.

When analysing 53 studies that examine rates of death and injury for men and women during extreme weather events, nearly two-thirds found that women were more likely to suffer death or injury from extreme weather.

Findings showed that women’s lower societal status and cultural restrictions contributes to the greater risk they face in periods of weather crisis.

There is no doubt, both vulnerable men and women will continue to experience the effects of climate change, however it is women who will feel it most.

But hope is not lost, because they are uniquely important to the solution. We need to make sure more and more women are placed in decision-making roles across climate negotiations going forward.