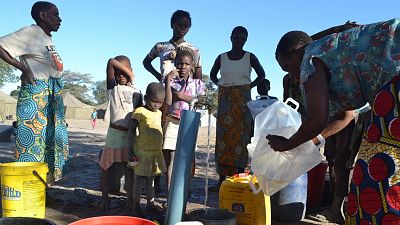 Twelve years ago in Copenhagen, rich nations made a pledge to provide $100 billion (€87 billion) in climate finance.

It was meant to help those countries experiencing the worst impacts of climate change to adapt. Now at COP26, that pledge has finally been delivered - three years after the deadline that was initially set.

Humanitarian aid foundation, the International Federation of Red Cross and Red Crescent Societies (IFRC), are among those that are responding to climate disasters happening now.

These include flooding, hurricanes, fires and the first climate-induced famine happening in Madagascar.

“For many many communities, this is not about 2050 or 2060,” says Jagan Chapagain, secretary general of the IFRC.

“I think that what they are saying, the messages have been repeated many, many times, but unfortunately not heard, by the decision-makers.

“And these messages are that climate change has already happened.”

The power of physical presence

The IFRC says that in Glasgow, the messages from these communities should have been a part of negotiations.

"What would actually even be better would be for some of our colleagues that are on the frontlines of responding to disaster impacts to be here," says Thandie Mwape, coordinator for humanitarian diplomacy at the IFRC.

"And they themselves tell the story of how they are in communities in floodwaters that high, helping women and children get to safety."

I totally believe that there is something powerful about physical presence.

She praises the young people protesting, marching and striking outside the summit for raising the voices of those who do not have the luxury of travelling to the UN climate conference.

"I totally believe that there is something powerful about physical presence in negotiations in convincing people to understand and have empathy sometimes.

"So when we've seen the young people take to the streets in Glasgow, and make their voices heard, the leaders have paid attention."

Too little too late

But it isn’t just about receiving the money, the IFRC says. It needs to be put to use in the most effective ways for those on the front lines of the climate crisis.

“A lot of these local solutions are not expensive. They don't cost a lot of money,” Chapagain adds.

“But what happens is because these resources go through layers of bureaucracy, somehow the money disappears. And by the time it reaches the community is too small, too late, with too many conditions.”

As COP26 comes to an end, the real hard work now begins. For the IFRC it is important to make sure that any pledges, including those around climate finance, are implemented in a way that is both effective and timely.

Watch the video above to see our conversation with the IFRC at COP26.