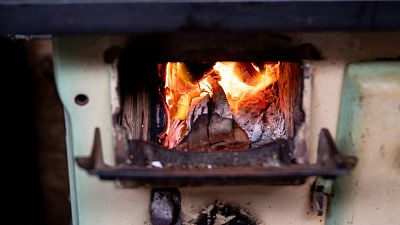 Mums for Lungs says there have been thousands of complaints about wood burning in the UK   -   Copyright  Unsplash
By Rosie Frost  •  Updated: 18/10/2021

During the winter, Hazel and her family can smell woodsmoke inside their home. It makes its way in through windows, door frames and even the letterbox, she says.

“I have no control over the air quality in my own home and cannot prevent my family from breathing dirty air.”

It has got so bad in the UK that the Winchester homeowner started to monitor the air quality indoors.

“I noticed a rise in Particulate Matter (PM2.5) in the lounge as the evenings wore on - I can only attribute that to the woodsmoke invading our property,” Hazel explains.

After she was diagnosed with breast cancer last year, potential carcinogens in the smoke are a worry.

“I am ok now, but the knowledge that I and my family are breathing polluted air within our own home is distressing.”

Hazel is a member of the campaign group Mums for Lungs who are calling for the UK government to take action on unnecessary wood burning. Their research shows that 18,600 complaints have been made over the last six years by members of the public.

Some of the areas with the most complaints are urban councils in places such as outer London, Oldham or Preston where pollution from other sources is already an issue. Despite this, just 19 fines have been issued - three every year.

Susannah (not her real name) lives in Warrington, a town in the north of the UK between Liverpool and Manchester. Over the last few years, she says the smell from wood-burning has increased to the point where it is impacting her health.

My lungs were affected so badly that my GP had to refer me to a respiratory specialist.

“Within weeks of my neighbour installing their wood stove, my lungs were affected so badly that my GP had to refer me to a respiratory specialist,” she says.

Susannah adds that she has contacted her local council many times and they are aware of the increase in the amount of these stoves but, “seem reluctant to do anything about it.”

“I’ve also contacted my MP who has shown no interest in the issue at all.”

Why are wood-burning stoves bad?

Domestic wood burning has become one of the single biggest sources of PM2.5 pollution in the UK. According to government data, it produces three times more of this small particle pollution than road traffic.

PM2.5 is harmful because it enters the bloodstream, travelling around the body to lodge in organs. This can make respiratory conditions such as asthma worse and, over time, contribute to cardiovascular and respiratory diseases including lung cancer.

While overall emissions of PM2.5 have decreased in the UK to less than half of what they were in 1990, emissions from wood-burning have increased sevenfold in the same period.

On top of this, Hazel says, burning wood is “a step in the wrong direction” for the environment. “Wood burns inefficiently compared to other fuels, so emits more carbon per unit of energy than fossil fuels.”

“Logs are also often transported long distances and large amounts of energy are used to dry them - adding to the carbon footprint.”

A vast majority of these emissions are not essential either, says Mums for Lungs. Research shows that 96 per cent of households that use a wood-burning stove have an alternative source of heat.

Only new ecodesign stoves will be allowed to be sold in the UK and EU from 2022.

But even these ‘eco-friendly’ wood-burning stoves emit 750 times more pollution than an HGV, according to a recent study from Green Transition Denmark. Tests were done under laboratory conditions so pollution could be even higher in real-world situations, researchers say.

Experts from the NGO have called the new regulations shockingly weak.

Mums for Lungs is calling for the UK Government to phase out the sale of new wood stoves over the next 15 years. They want wood burners that aren’t an essential source of heat to be banned by 2027.

The campaign group is also asking for labelling on these kinds of stoves to better inform consumers of the potential health and environmental effects.

“Many people use them as they have been sold the idea that they are an eco-friendly way of heating your home,” Hazel says, “this is not the case. There is a lot of greenwashing about.”