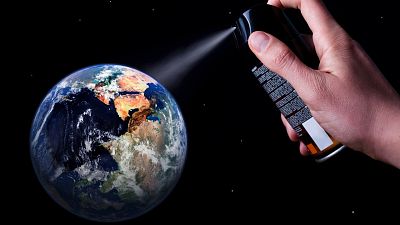 Three scientists made a shocking discovery in 1985: chemicals known as CFCs were causing a hole to develop in the ozone layer.

At the time these chemicals were widely used for manufacturing consumer goods such as fridges, styrofoam packaging and hairspray.

Once thought to be harmless, it was theorised in the 1970s that when they were released into the atmosphere, the sun’s rays broke them down and they bonded with ozone chemicals. This caused damage to the protective layer of gas that surrounds the earth.

Jonathan Shanklin was employed by the British Antarctic Survey (BAS) to interpret a backlog of data on the ozone layer above Halley Station when he made the discovery.

“We had an open day at the survey and I thought it would be interesting for people to see the latest ozone data from Antarctica and compare that with amounts from earlier.

“We thought they’d be the same, so people didn’t need to worry about exhausts, concord or using spray cans.

“But it turned out the two were different.”

Within four years of the discovery, CFCs were phased out of production completely.

The Montreal Protocol, which banned these chemicals, was the first-ever treaty to be universally ratified with 197 countries implementing the ban.

It was a feat of international cooperation and an example we badly need to learn from now. But with the recent IPCC report showing that urgent action is needed to reduce carbon emissions, what can we learn from the process of banning CFCs?

Why was the CFC campaign so successful?

Still employed at BAS 36 years later, Jonathan is certain that the tangible nature of the ozone hole is what made the work to repair it such a success.

“There’s no real arguing with pictures. If you can show a picture that demonstrates something people are much more able to understand than even a simple graph.”

Scientific consensus was achieved quickly and political consensus followed thanks to one important world leader.

“Margaret Thatcher was the Prime Minister at that time and she had trained as a chemist so she could understand the science.

“She was able to take a lead on the global stage to ensure the protocol was signed.”

Industry figures were also key. With profitable alternatives at the ready, they were willing to get involved in banning CFCs quickly, but a major factor was public opinion.

“With a thinning ozone layer, more ultraviolet light would reach the surface and that would increase skin cancer,” Jonathan points out.

“As soon as you mention cancer that’s a big public reaction so something has to be done.”

What can we learn from the CFC campaign?

Where is this coalition of industry, science, politicians and public opinion now?

Jonathan believes that when the debate over CO2 began, alternatives were less readily available and the public wasn’t as quick to understand the dangers of global warming. Some initially believed it would leave us basking in the warmth of hotter summers.

But the speed of change is what really sets the Montreal Protocol apart from current policies around reaching net-zero carbon emissions.

“You could see the issue with carbon dioxide decades ago but we’re still talking about doing a little bit, but a little bit is really putting a sticking plaster on things.”

Citing plastic pollution, biodiversity and soil degradation, Jonathan thinks that facing up to the real cause of environmental catastrophes is.

“Behind all of those things lies one organism and that’s us. We are not willing to do anything about us.

“At the moment all natural resources are regarded as free at the point of delivery...it’s like the lumberjack cutting off the branch he’s standing on.”

However, Jonathan is hopeful that the tide is beginning to turn in terms of both industry and public attitudes.

Many companies now recognise their long term profitability is at risk due to climate change and young people likely to suffer from the consequences of increased CO2 emissions are coming up to voting age.

“Young people, in particular, are more astute in realising there is only one planet and we mustn't behave as if we have three or four planets behind us.”

Beyond public opinion, industry and politics, Jonathan is keen for scientists to take a wider perspective beyond their specialism to see the links between global issues.

“It’s like a doctor making a diagnosis. If you want you can go to a specialist but more often it will be a General Practitioner.

“We need more General Practitioners in science and fewer specialists.”