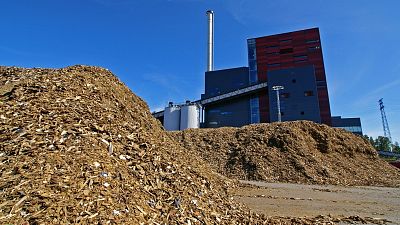 Scientists are asking governments around the world to stop using wood as a "renewable" source of fuel.   -   Copyright  Getty via Canva
By Rosie Frost  •  Updated: 12/02/2021

A group of more than 500 scientists have signed a letter calling on the EU to stop treating the burning of biomass as carbon neutral.

They are asking governments around the world, including Europe, to end subsidiaries for burning wood that are harmful to biodiversity and pose a serious threat to the world’s forests.

They claim that for each kilowatt hour of heat or electricity produced by burning trees, “it will likely add two or three times as much carbon to the air as using fossil fuels.” This is because wood is not as energy-dense as fuels like coal or oil meaning more has to be burnt in order to generate the same amount of power.

It was signed by hundreds of scientists and economists including former chair of the UN’s Intergovernmental Panel on Climate Change, Jean-Pascal van Ypersele. The group worry that this “false solution” is replacing real efforts to reduce carbon emissions in countries around the world.

“Fighting the climate emergency without changing the EU’s biomass rules is like trying to bail out a boat with a hole in the bottom,” says Alex Mason, Senior Policy Officer at WWF European Policy Office.

He adds that it is what you are burning that matters “not how sustainably the forest was managed”.

"Regrowth takes time the world does not have to solve climate change”
Over 500 scientists tell world leaders, to stop treating the burning of biomass as “carbon neutral”.
”You can help end this madness.” #StopFakeRenewableshttps://t.co/SAzgTKtCJ9

Why is burning wood a bad idea?

Although technically ‘renewable’, regrowing trees takes years. Natural regeneration of forests has been found to capture carbon faster and for longer than replanting efforts. Simply leaving trees to grow on their own could potentially be the “single largest natural climate solution available to us”.

For years, producers of paper and wood have used their waste to generate electricity which did not lead to extra trees being cut down.

But, the group of scientists say, “in recent years there has been a misguided move to cut down whole trees or divert large portions of stem wood for bioenergy, releasing carbon that would otherwise stay locked up in forests.”

“If the world supplied just an additional 2 per cent of its energy from wood, it would need to double its commercial wood harvests,” reads the letter. They add that there is good evidence that increased use of bioenergy already means more forests are being harvested in Europe.

“The revision of the EU renewables law is a crucial chance; the Commission must listen to scientists and citizens and stop trees being burned in the name of the climate,” says Mason.