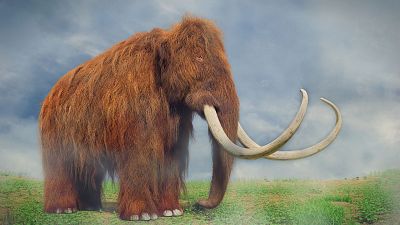 The woolly mammoth could be resurrected within a few years if a new biotech firm is successful.

Bioscience company Colossal plans to impregnate an elephant with an embryo made of mammoth and elephant cells.

This de-extinction is made possible by CRISPR gene-editing technology which, like molecular scissors, can insert the extinct DNA into the genome of an Asian elephant.

Mammoth DNA, collected from tusks, bones and other preserved body parts found in ice, will be sequenced to create an “elephant-mammoth hybrid” that looks like a furrier, larger elephant with smaller ears and a high-domed head.

An “elephant-mammoth hybrid” looks like a furrier, larger elephant with smaller ears and a high-domed head.

Already, thousands of changes have been made to a cell nucleus; it’s not known exactly how many are needed to bring the beasts back and enable them to survive in the freezing Arctic.

"Never before has humanity been able to harness the power of this technology to rebuild ecosystems, heal our Earth and preserve its future through the repopulation of extinct animals," says co-founder of the new firm, Ben Lamm.

Last year, the bioscience company announced it had managed to raise €12.6 million from investors so far, in order to achieve the co-founder’s vision of de-extinction. These include billionaire entrepreneurs such as PayPal co-founder Peter Thiel and the Winklevoss twins.

A new form of ecological conservation

Woolly mammoths went extinct around 4,000 years ago at the end of the last “ice-age”. Bringing them back, Colossal’s team says, is a step towards new technological advancements in environmental conservation.

"Colossal leverages the exponential progress made in technologies for reading and writing DNA and applies it to iconic ecological conservation and carbon sequestration issues," says fellow co-founder, George Church.

The Harvard University geneticist and other proponents of the de-extinction movement say that along with new insights in the fields of biology and evolution, the project has the power to help repair ecosystems and improve biodiversity.

Church has suggested that genetic work could also protect endangered elephants, giving them enough advantages to thrive in other climates. “We’d like to see them occupying every continent of the world, except for the two [mammoths didn’t inhabit] - Antarctica and Australia,” he said in a recent interview.

“We hope to set up stations away from human populations so the [Arctic] elephants have room to roam and prosper.

How could mammoths mitigate climate change?

Colossal has also suggested that woolly mammoths may have the capacity to revitalise Arctic grasslands.

Without these heavy-footed herbivores, there is a danger that trees, moss and scrubs will take over too much of the land, which prevents frost from penetrating the soil so easily.

Arctic permafrost is one of the most critical topographies in the world, keeping carbon frozen underground, but it has been gradually thawing in a feedback loop that accelerates global warming.

Roaming mammoths encouraged grasslands to dominate instead, enabling permafrost to penetrate deeper into the ground. Church hopes that herds of ‘Arctic elephants’ could help swing the process back.

Pending their arrival, a bold research project is underway in Siberia. The Pleistocene Park is a huge experiment to restore the mammoth steppe ecosystem that dominated the Arctic in the Pleistocene period 12,000 years ago. Other herbivores including reindeer, moose and yak are currently keeping the grasslands low.

De-extinction is not without its problems

"The conversation thus far has been focused on whether or not we can do this. Now, we are progressing toward the: ‘Holy crap, we can - so should we?' phase," says Douglas McCauley, an ecologist at University of California, Santa Barbara.

In 2016, McCauley provided a guideline for de-extinction, which concluded that any large scale de-extinction plan would be overly expensive and counterproductive.

Researchers who have debated the costs of de-extinction programs argue that the money could be better spent elsewhere, namely on efforts to prevent the extinction of the world’s plants and animals today. As it stands, over 30 per cent of trees worldwide are threatened by extinction and the UN has warned one million species today are now at risk in total.

There is also some concern that bringing extinct species back to life may have the potential to surface unknown pathogens. These viruses and bacteria may be able to infect humans or other animals.