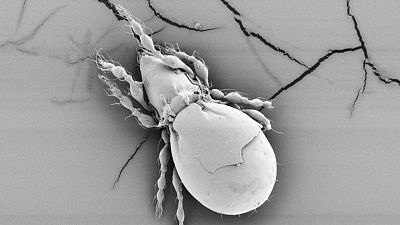 A tiny beetle mite species, just one-fifth of a millimetre in size, has helped scientists prove that animals can survive for a very long time without having sex.

The Oppiella nova is an all-female species and represents something that scientists call an “ancient asexual scandal”. They couldn’t figure out how the beetles were managing to reproduce without having intercourse, so assumed they must be hiding away from the prying eyes of biologists.

“There could be, for example, some kind of ‘cryptic’ sexual exchange that is not known. Or not yet know,” says first author of the study Dr Alexander Brandt.

“For example, very rarely a reproductive male could be produced after all - possibly even ‘by accident’.”

The long term survival of animal species without sexual reproduction was thought to be practically impossible - until now.

What scientists at the Universities of Cologne and Göttingen discovered is that the Oppiella nova beetle mite has survived for thousands - maybe even millions - of years without having sex.

This animal can clone itself instead of reproducing

Normally, there is a big evolutionary advantage to having two parents. In animals with two sets of chromosomes, including humans, sex makes sure that our genetics get ‘mixed’ providing diversity.

It means, on average, the two sets of genetic information we have remain very similar but there are differences in individuals. This genetic diversity is what allows most life on earth to adapt over time, evolving characteristics that best suit our environments.

But this ‘mixing’ doesn’t happen in organisms that reproduce asexually. Despite producing what are essentially clones of themselves, they are still able to introduce genetic variation and adapt to their environments in a different way.

Despite producing what are essentially clones of themselves, they are still able to introduce genetic variation in a different way.

The two copies of their genetic information accumulate separate mutations, evolving completely independently. This is something called the Meselon effect and is only found in species that only reproduce asexually.

“'That may sound simple. But in practice, the Meselson effect has never been conclusively demonstrated in animals - until now,” says Prof. Tanja Schwander at the Department of Ecology and Evolution, University of Lausanne.

The survival of a species for this long without sexual reproduction is rare but as the study showed, not impossible.

The team of biologists and zoologists still think the tiny beetle could have some surprises in store for them when it comes to understanding how evolution works without sex.