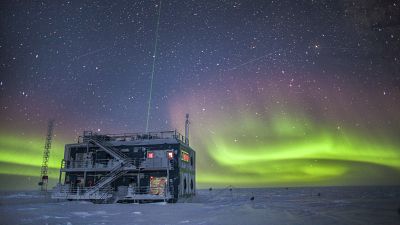 A large hole in the ozone layer is continuing to heal, helping weather systems in the southern hemisphere to go back to normal, according to a study from the University of Colorado Boulder.

Our prolific use of the chemicals chlorofluorocarbons, or CFCs, caused incredible damage to the ozone after they became widespread in the 1960s. As well as being used industrially for refrigeration and the manufacture of packaging materials, they were also in household aerosols like hairspray and in air conditioning units.

While relatively harmless when released in our lower atmosphere, they undergo a reaction when they are hit by sunlight in the stratosphere. The chlorine these chemicals release destroys the ozone layer, a protective cocoon of gas that shields us from harmful solar radiation. As CFCs were used more and more, a hole opened up over Antarctica.

Scientists also measured another effect of this ozone depletion. It turned out some important air currents responsible for weather systems in the southern hemisphere were moving. One tropical jet stream, the Hadley cell which is responsible for tropical rain belts, hurricanes and subtropical deserts, had been getting wider. As this belt got wider, the number of storms and the amount of rainfall in South America, East Africa and Australia was changing.

In 1987 an internationally collaborative treaty called the Montreal Protocol banned the use of CFCs in an effort to stop this potentially catastrophic damage. The global agreement proposed to protect the ozone layer by completely phasing out the production of substances like CFCs that were depleting it.

Since 2000, trends have shown recovery and in 2019 the ozone hole was the smallest it has been since it was discovered. The challenge for scientists was to prove that these changes, particularly in affected weather systems, were caused by action taken to ban CFCs and not just natural fluctuations.

The researchers say that their advanced computer modelling shows recovery is more than just a coincidence. “Identifying the ozone-driven pause in circulation trends, in real-world observations, confirms for the first time what the scientific ozone community has long predicted from theory,” said John Fyfe, one of the paper’s co-authors.

Above anything else, it proves that organised, global action can be used to reverse environmental damage. The next hurdle, says lead author Antara Banerjee, is to tackle rising greenhouse gas emissions.

"We term this a 'pause' because the poleward circulation trends might resume, stay flat, or reverse,” Banerjee said. “It’s the tug of war between the opposing effects of ozone recovery and rising greenhouse gases that will determine future trends.”