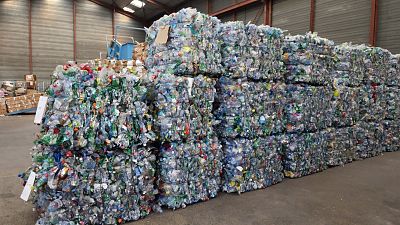 Piled up and crushed plastics, single use plastics are traditionally harder to recycle   -   Copyright  AFP
By Sabrina Fearon Melville  •  Updated: 19/05/2021

A new study reveals that just 20 businesses produce 55 per cent of the world’s plastic single-use waste.

Research by the Minderoo Foundation tracked the journey of polymers as they left factories and followed their journey into becoming single-use plastics, before being thrown away.

Currently, single-use plastics account for the majority of the plastics which are thrown away annually. In 2019 the Foundation reported that over 130 million metric tonnes were thrown away in 2019 - most of this is burned, placed in landfill or at its very worst discarded into the environment.

Single-use plastics often end up in our oceans and make up most of the visible pollution you might see washed up on your local beach.

The report found that companies like ExxonMobil, a gas corporation, and Dow, a chemical manufacturer, top the list along with Sinopec, a petroleum and chemical company. Together these three companies single handedly account for 16 per cent of global single-use plastic waste.

Together these three companies single handedly account for 16 per cent of global single-use plastic waste.

The report also uncovered that many global banks and investors are funding single-use plastic creation by buying shares in the parent companies that produce the polymers. Since 2011 banks such as Barclays, HSBC and Bank of America have lent close to €24.5 million ($30 million) to these parent companies, as result, they have directly contributed to the climate crisis and the battle against single-use plastics.

Out of the 20 companies found to be the worst polluters, three of them are based in Europe and have a collective damage of 4.6 million tonnes.

In the next five years, it is estimated that the planned expansion of virgin polymer production will hinder the hopes of a circular plastic economy and as a result, the usage of single-use plastic could grow by up to 30 per cent.

This development will negatively affect developing countries as this is where the majority of single-use plastics end up.

European policymakers have continually debated single-use plastics within Europe and have made efforts to reduce marine litter by 2030 by ensuring all plastic bottles will have to be made of at least 30 per cent recycled content.

Former Vice President of the United States Al Gore and founder and chairman of The Climate Reality Project says,

“Tracing the root causes of the plastic waste crisis empowers us to help solve it. Just as disclosure of the greenhouse gas emissions was the first step to creating global targets for reductions, disclosure of funding and production of single-use plastic is necessary to turn the tide on this escalating problem.”

'Waste age': Art explores the devastating impact of what we throw away