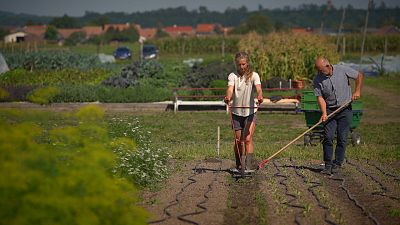 In this special edition of Futuris, we look at one of the missions that the European Union is launching to find solutions to the main challenges of our time, which include adaptation to climate change, protection of land and seas and the fight against cancer

There are five parts to the Horizon Europe programme, which will begin in 2021.

Mariya Gabriel, European Commissioner for Innovation, Research, Culture, Education and Youth, explained to me the basis on which the ten-year framework has been designed:

"Issues like the fight against cancer, climate change, smart cities and the health of soils, oceans and seawater were chosen because their impact on European citizens is huge.

"It’s because we need to act together to see concrete results.

"And this is what we see in the recommendations of our reports; for example, the cancer project proposes to save three million lives by 2030; less than 10% of the world’s population lives on our continent, but 25% of diagnosed cases are in Europe. We have to act."

The Commissioner believes there are several key elements for the success of the missions:

"First, a mission must be owned by the citizens. They must recognise themselves in it and then, through their participation in the process, see results.

"That's why I am pleased that we have been able to set up this process from the beginning.

"This new framework, a process of co-creation, can be a real game changer for future decisions.

"Because after all, a project (like this) aims to affirm benefits for Europe, the benefits of the action that is undertaken at European level in people's lives, in each region, in each member state, in the different communities."

The Soil Health and Food part of the framework has set a target of restoring 70% of agricultural land by 2030.

Cees Veerman, the Head of the Project, says further degradation of the soil must be arrested - then reversed:

"By increasing the level of carbon in the soil, which is, of course, another measure to prevent the further degradation of climate.

"Also, the storage of water so that biodiversity, agriculture, food production, forestry and also people living in the cities can all contribute to (putting) soil in a better condition."

An example of this approach is the Best4Soil Project, an approach to soil management that combines nature and science.

The project recognises that soils are essential for all life-sustaining processes on the planet. More than 95% of our food comes from land-related production, and for that reason, keeping soil healthy is paramount.

However, between 60-70% of European soils are currently unhealthy in terms of the presence of organic matter and minerals that are needed to form nutrients for plants and micro-organisms, according to data provided by Soil Health and Food Mission Board and Joint Research Centre.

The unhealthy condition is the result of a series of inappropriate land practices including intensive farming, excess irrigation, pollution by chemicals and pesticides. Soils are also paying the price of climate change, erosion and sea level rises.

Depending on the type of soil, nature can take up to a thousand years to produce a 1 cm layer of fertile ground; but it only takes a few years of bad practices to lose it.

Best4Soil’s Project Co-ordinator Harm Brinks says the damaging methodologies have to be minimised - and then phased out completely:

"The challenge for agriculture is to feed the world and the growing population and, as we see in many part of the world, soil quality is going down due to heavy machinery and due to intensive production systems."

One site making progress as part of the Best4Soil Project is the Grand Farm in Absdorf, Austria, run by entrepreneur and farmer Alfred Grand.

In the context of the paradigm shift in agriculture that Best4Soil wants to bring about, Alfred Grand says his farm is an example of a positive partnership between nature and science:

"We want to work together with science to test and evaluate new solutions, new systems and then show them to our professional colleagues - and to society."

"There are different methods that can be used as a farmer, including the application of compost, the sowing of winter cover crops or intermediate cover crops and crop rotation.

"Immediately after we have harvested a crop, we try to sow a cover crop."

Alfred Grand explains that cover crops allow the nutrients in the soil to be protected and conserved in a much more effective way than merely allowing land to lie fallow:

"The more diverse it is, the more life brought into the soil with the compost, the healthier my soils are. And the less pesticides I have to use, for example."

Alfred says vermicompost and cover crops are two preventive practices to increase the quality of the soil:

"The large amount of micro-organisms play an important role in soil health. The greater the number, the greater the diversity of species, the more stable the soil is, the fewer diseases and the fewer problems I have with the soil"

Another type of natural fertiliser widely trialled at the Grand Farm is thermophilic compost, a mix of organic matter with carbon and nitrogen content.

Researchers have to regularly analyse samples of this compost in order to check its quality - as well as the components released into the soil and the atmosphere - and avoid any contamination.

The compost formation process is activated by bacteria and fungi; it can produce temperatures of as much as 60-70 °C, which is enough to kill the organisms that can cause plant diseases.

Florian Schütz, a Masters student at the University of Natural Resources and Life Sciences in Vienna says climate change has increased the importance of such methods:

"It’s very important that we conserve our energy and resources.

"Biomass is a source of energy - particularly nitrogen - and we have to make sure that we save as much of it as possible."

The Grand Garden section of the Grand Farm is a small scale example of this nature-based approach. The aim is to produce healthy food with a high variety on a small area of about a hectare and then to sell it locally. Cultivation and harvesting are mostly done by hand, with no heavy machinery used. The model for the Grand Garden is based on the work of Canadian organic farmer Jean Martin Fortier, author of The Market Gardener.

"Our method of vegetable production has many advantages with economic, ecological and social dimensions.

For me personally, the most important thing is that jobs are created, that we have direct contact with the consumer, that we also provide education; and that we promote and rebuild the soil and the environment."

When managed sustainably, soils are key to the balance of our ecosystems. By acting as a sponge, to store carbon and reduce greenhouse gas in the atmosphere, soils can also mitigate the effects of climate change.