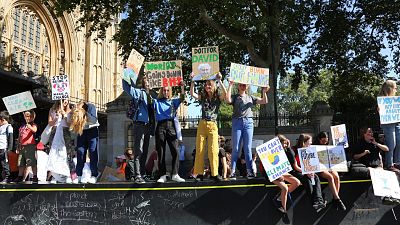 On Friday 20th September millions of people across the globe took part in the Global Climate Strike. Calling for governments to act on the climate crisis, adults joined young people in an extension of the #Fridaysforfuture campaign.

The Euronews Living team stood in solidarity alongside strikers outside Westminster; here are some powerful images captured on the day.

Thousands of young people collected outside the Houses of Parliament with crowds stretching from Millbank and filling Parliament Square.

There were speeches from political leaders like Caroline Lucas and Jeremy Corbyn as well as student leaders like Zamzam Ibrahim, president of the National Union of Students.

The atmosphere was calm but indignant with a majority of the crowds made up of those under 18. There were even some schools that had brought their students on a school trip to take part in the strike.

Placards made for the strike were often humorous with many signs having been made from recycled materials like cardboard from cereal boxes and delivery boxes.

Fridays for Future started in 2018 when activist Greta Thunberg demonstrated outside the Swedish parliament to call for her government to enact stronger action on climate change.

The young activist was nominated for a Nobel Prize for her activism earlier this year.

The UK Student Climate Network said nearly 200 events had been planned to take place across the country.

According to the strike's organisers, 100,000 people attended the event in London with thousands more marching in cities across the UK.

At one o'clock, people set off alarms to symbolically 'raise the alarm' that action was necessary.

Many parents joined their children in advocating for more decisive action on the climate crisis.

The action came in advance of the United Nations climate action summit in New York which will bring together world leaders to discuss strategies for mitigating the crisis.

This week, world leaders will come together to present their plans to reduce their country's carbon dioxide emissions.