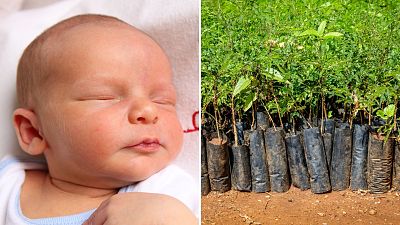 Over 15 million trees have been planted in Uganda in three years, as part of an unlikely partnership with newborn babies in a country over 9,000 kilometres away.

The Size of Wales project first set its sights on domestic reform in 2008 when it announced it would plant a new tree in its woodlands for every baby born or adopted in order to offset carbon emissions.

Since 2018, the government-funded initiative has extended its efforts to Mbale, a hilly, heavily deforested area of Eastern Uganda that was once rich in biodiversity. This development is now known as the charity’s Plant! scheme.

Every time a new child arrives in Wales, two trees are now planted - one at home and one in Mbale.

Each baby receives a certificate made of recycled paper as proof of this incredible environmental feat. This has resulted in 15 million trees being planted in Uganda in just three years, combatting a tumultuous history of deforestation in the Sub-Saharan country.

Why did this initiative start in Wales?

“An area the size of Wales” is a unit of measurement frequently used to understand the impact deforestation has on our global community.

It’s an easier way of grappling with the potential severity of harmful events instead of speaking in complex mathematical units that often fail to illustrate the problem at hand.

According to the BBC, the size of Wales is equal to the destruction an asteroid could cause if it hit the earth, or the estimated impact area of a nuclear bomb.

"People in general find it easier to appreciate the size of geographical features when they are related to other known features, than when they are presented in units of, say square km," explains Professor Adrian Luckman, who teaches at Swansea University, Wales.

Each baby receives a certificate made of recycled paper as proof of this incredible environmental feat.

The Size of Wales named itself after the concept as a mission statement, pledging to one day reforest an area the size of the country. This goal was achieved in 2016 and allowed them to extend their efforts elsewhere through the tree planting scheme.

The African continent is often underrepresented when it comes to environmental issues, and Uganda is no exception. Home to 60 protected areas and 10 national parks, the charity set its sights on Uganda for a number of reasons.

Crucially, between 1990 and2010 the country lost 31 per cent of its forest cover – a decline from 5 million hectares to 3.6 million hectares - due to human interventions and climate change-induced disasters.

Uganda’s logging trade is also largely to blame for this, as over 80 per cent of its timber trade is believed to be illegal and ends up being smuggled to other countries across the continent, despite several legal frameworks in place for the prevention of this practice.

How do they keep track of all the babies?

The Plant! scheme actively aligns with 10 of the United Nations’ Sustainability Goals by promoting climate action, life on land, and responsible consumption and production.

The Size of Wales works together with the Mount Elgon Tree Growing Enterprise (METGE), based on the border of Uganda and Kenya, in order to make this happen.

In Wales, the Office of National Statistics (ONS) keeps track of new births and adoptions in order to ensure the charity’s targets are accurate. Children are sent a letter and a certificate welcoming them to visit the site of the woodlands where their tree was planted.

Children are sent a letter and a certificate welcoming them to visit the site of the woodlands where their tree was planted.

In Uganda, free tree seedlings are distributed to local people to be planted on community land. The charity also provides materials such as fuel efficient stoves, and advice and support for other nature-focused livelihoods, like bee-keeping - an area of specialisation for METGE.

Over 16,000 families across 10 villages in Mbale are now better off from this partnership.

With 15 million trees successfully planted, the scheme intends to continue planting trees in Uganda at a rate of three million a year in order to aid community resilience in the face of environmental challenges.

“The Mbale Trees initiative is an example of what can be achieved when nations work together to combat climate change,” says Julie James, Minister for Climate Change in Wales.

“Our pledge to plant 3 million more every year for the next 5 years will deliver substantial benefits, not just for those within Mbale, but it will have a considerable global impact on climate change."

Why are hundreds of sheep forming the shape of a heart in a field?