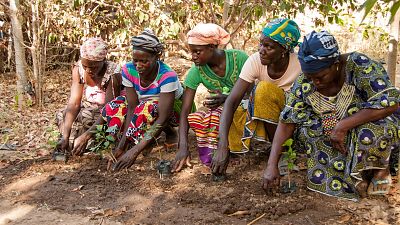 The International Olympic Committee (IOC) is planting 355,000 native trees in Mali and Senegal in an effort to become climate positive.

This “Olympic Forest” is a contribution to the Great Green Wall initiative which is helping to restore degraded landscapes across Africa’s Sahel region.

“The Olympic Forest will support communities in Mali and Senegal by increasing their climate resilience, food security and income opportunities, and will help the IOC become climate positive already by 2024,” says IOC President, Thomas Bach.

In line with targets set by the Paris Agreement, the organisation is committed to reducing its carbon emissions by 30 per cent by 2024 and 45 per cent by 2030.

The 2,120 hectare Olympic Forest is expected to sequester 200,000 tonnes of CO2 - more than the IOC’s estimated emissions in the next three years.

“Addressing climate change is one of the IOC’s top priorities, and we are fully committed to reducing our emissions in line with the Paris Agreement,” Bach adds.

Last year, the IOC announced that all Olympic Games will be required to be climate positive from 2030 onwards. That means they will have to remove more carbon from the atmosphere than they create.

Tokyo 2020 and Beijing 2022 have already committed to holding carbon-neutral games and Paris 2024 has announced its ambition to become the first climate-positive games.

What is Africa’s Great Green Wall?

The Great Green Wall is a project looking to create an 8,000km green belt across the width of Africa. Since 2007, millions of trees have been planted along the southern edge of the Sahara desert to combat desertification in the region.

The Olympic Forest will be planted across around 90 villages in Mali and Senegal - the host of the 2026 Youth Olympic Games.

“With Dakar 2026, our goal is to go beyond sport and use the Games as an opportunity to raise young people's awareness, and beyond them that of the various stakeholders, about today's sustainability challenges and ways in which we can help address them,” says Mamadou Diagna Ndiaye, President of the Dakar 2026 Youth Olympic Games Organising Committee.

The IOC is working with Tree Aid, a non-profit that has been working with people in the drylands of Africa for 30 years. The organisation tackles poverty and the growing impact of the climate crisis by planting trees and restoring land.

“As we enter the UN Decade of Ecosystem Restoration, making the Great Green Wall a success is more important than ever to secure the future of the region and the people who live there,” says Tree Aid CEO Tom Skirrow.

“The Olympic Forest shows what is possible when we all work together.”