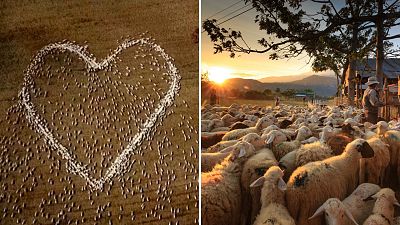 One Australian farmer has produced a piece of art by arranging hundreds of sheep in the shape of a love heart, in a field.

When Ben Jackson found out he couldn’t go to his aunt’s funeral because of COVID-19 restrictions, he decided to pay his respects with this novel alternative.

He shot the scene with a drone and it was viewed by mourners at her funeral in the city of Brisbane in Queensland this week.

If he spelt the names of his favourite musical bands with grain, then the flock would roughly adopt the same shape for several minutes.

Ben was locked down at the time across the state border at his farm in Guyra in New South Wales, 430 kilometres away.

Originally, the farmer started experimenting with making shapes with sheep to relieve the monotonous stress of hand-feeding livestock during a devastating drought across most of Australia.

He soon discovered that if he spelt the names of his favourite musical bands with grain dropped from the back of a truck, then the flock would roughly adopt the same shape for several minutes.

“It was one way to keep me motivated, keep the serotonin levels up,” says Ben.

Watch the video above to see how the sheep form the shape of aheart.

Big John, the biggest triceratops ever found, goes on display in Paris

Which country is planting a tree for every baby that is born?

These are the endangered plants we could grow on Mars