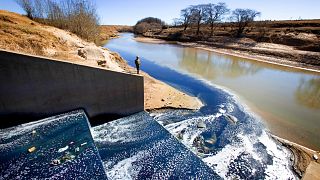 Some of the world’s largest fashion brands have been linked to dangerous levels of toxins in rivers across Africa.

A new report from Water Witness International (WWI) shows that the manufacture of fast fashion across the continent is linked to pollution that is killing rivers and denying access to safe water, toilets and washing facilities to workers and their communities.

In Lesotho, south-east Africa, research revealed a river, dyed blue by the manufacture of jeans and samples from Tanzania’s Msimbazi river, was found to have a pH as high as 12.

“I’ve taken samples which burned my hands of river water that was as strong as bleach,” says Nick Hepworth, director of WWI and lead author of the report.

Chromium six, used in older and cheaper black dyes, is a toxic metal. Hepworth says they have found levels of this chemical in some rivers that are five times what is considered safe. It poses a significant problem for the communities near factories that rely on these water sources in their everyday lives.

Around 50 high street brands source their clothing from African countries including ASOS, Zara and Primark.

“You’ve got untreated industrial waste from textile factories being discharged directly into rivers that are being used by thousands of people for domestic water use,” Hepworth explains.

“There is no alternative but to use the river water that’s polluted to wash your clothes, to water your garden or to water your cattle.”

WWI found that around 50 high street brands source their clothing from African countries including ASOS, Zara and Primark, but didn’t tie the pollution directly to the supply chain of any company.

Not just a pollution problem

Multiple sources interviewed for the report, including government officials, also raised concerns about access to clean water and toilets in Africa’s garment factories.

For the women who make up a majority of the workforce, water, sanitation and hygiene (WASH) facilities are essential for menstrual hygiene management and dignity.

“Many thousands of women are employed in the textile and apparel sector in Africa,” says Sareen Malik, executive secretary for the African Civil Society Network for Water and Sanitation.

We don’t know if they have the services needed to protect against COVID or for menstrual hygiene.

“We don't know how well their WASH needs are provided for in the workplace or in their communities because the data isn’t reported. We don’t know if they have the services needed to protect against COVID or for menstrual hygiene.”

In some cases, the demand caused by factories producing this clothing could even be taking water away from communities by gaining privileged access to the supply, says WWI.

How can the emerging fashion industry be more sustainable?

With the industry still young in Africa, Hepworth believes there is still an opportunity to learn from bad practices elsewhere.

But the ability of local regulators to step in and prevent the damage factories are doing is limited. In many countries, laws are already strong but pollution is well known and regulators turn a blind eye to the problem. One official from Tanzania’s National Water Board says it is as though the “industry has a free pass to pollute”.

“Their hands are tied. Imagine you're a regulator in a country that's desperately poor. It's very hard for you to enforce pollution controls against a company that employs 10,000 people,” says Hepworth.

“And that's why it's so important that the sector itself, improve this performance, and that we pull the levers of change from consumers, investors, shareholders.”

All those systems are available, there's just a lack of political will to put them in place.

He explains that he doesn’t think the clothing brands are “evil” but advises - don’t look into the details of the suppliers that create their clothes. They need to step up and dive deeper into what is really going on. If they do, then fast fashion could be a force for change.

WWI believes that what is needed is mandatory reporting so that transparency in supply chains is actually meaningful. Instead of solely providing information about who their suppliers are, they also need to check their compliance with local laws, health and safety.

“All those systems are available, there's just a lack of political will to put them in place,” Hepworth adds.

Despite concerns raised in the report, some brands and manufacturers are providing hope for a sustainable future of fashion in Africa. Hepworth says there are clear examples of brands including H&M and PVH (who own Calvin Klein), leading the way.

In Ethiopia and Tanzania, for example, state of the art practices on responsible water use are being adopted by big suppliers. The Alliance for Water Stewardship (AWS) standard is helping companies comply with local laws and improve their water management.

Hawassa Industrial Park in Ethiopia provides more than 70,000 jobs almost exclusively in the manufacture of textiles and clothing.

It provides much-needed employment for women and young people in one of Africa’s fastest-growing cities.

Consumers and investors are more willing than ever to reward companies that treat their workers and the environment with respect.

Its leadership on responsible water use is helping to drive action with the government, NGOs and local people to improve access to safe WASH facilities in the communities where workers live, according to the report.

WWI doesn’t want to put an end to the garment industry in Africa. Consumers and investors are more willing than ever to reward companies that treat their workers and the environment with respect, according to the 2021 State of Fashion Report.

Thanks to this change in attitudes, the NGO hopes that the data it has collected can drive Africa’s fashion industry to grow in a fair and sustainable way.

“Part of what we’re trying to do is to make water issues on a par with plastics, climate, gender, race as one of the pressing issues of our time,” Hepworth concludes.

“There’s a really exciting potential, that by educating, that by supporting consumers to be more aware of the issue and what can be done about it, we can drive change.”