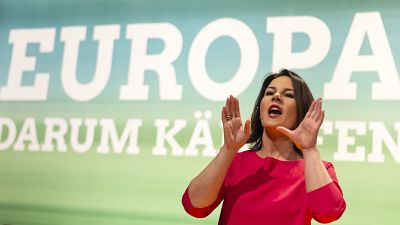 The German Greens could be part of a coalition after the September election   -   Copyright  Jens Meyer/Copyright 2018 The Associated Press. All rights reserved.
By Tim Gallagher  •  Updated: 20/08/2021

It’s no wonder then that European voters are turning to the continent’s various Green parties come election season.

The last few years have seen big gains for a political tribe that previously haven’t had much to celebrate. But who are Europe’s Green parties and politicians? And what can they achieve?

Terms like ‘net-zero’ and ‘reduced emissions’ are thrown around a lot, but for these guys global warming is central to their political identity. Now that they have some real power, maybe they can shake things up.

From oil producing Scotland to home-of-Volkswagen Germany, environmental parties are on the cusp of, or are already in, government for the first time.

Let’s take a look at who the European green parties are, and what they’re all about.

After striking a power-sharing deal with the Scottish Nationalist Party (SNP) today, the Scottish Greens are the first green party to get into government anywhere in the United Kingdom.

Under the power sharing deal the pro-independence party will add their eight seats in Holyrood to the SNPs 64 to make an overall majority, in a deal that was modelled on the one struck between the Greens in New Zealand and Jacinda Ardern.

Considered a significant development ahead of Glasgow hosting COP26 later this year, the Greens are hoping have a big influence on policy.

The party is keen for a tougher stance on oil and gas exploration in the North Sea, and takes a dim view of fish farms and road building plans - putting them at odds with union bosses.

France: En Marche on the run in urban seats

After winning big in local elections Europe-Ecologie-Les Verts (EELV) are eyeing a run in France’s presidential elections in 2022.

Dubbed ‘the green wave’ in 2020, the environmentally focused party won cities across the countries - including Bordeaux, Strasbourg and Lyon (home of the aptly coloured Euronews head office).

While there have been some political gaffes along the way - including criticising the Tour de France and trying to outlaw a Christmas tree - the new administrations have implemented some effective green policies.

In Lyon, for example, water has been taken into public ownership and pedestrian areas have been set up outside schools.

Ireland: The Emerald Isle goes green in the voting booth

The Irish Greens joined a coalition with Fine Gael and Fianna Fáil in 2020, striking a deal that brought together the two bigger parties after a century-long rivalry.

The Irish Green Party are focused on environmental and social initiatives, working on a Community Energy Bill that would give locals the ability to purchase at least 30 per cent of clean energy projects.

Elsewhere the Greens have increased the size of one of Ireland’s national parks and been vocal in support of marine protection areas for the coastal nation. The party is also keen on minimising flooding through restoring natural ecosystems.

Austria: Central Europe at the centre of climate policy

After getting 14 per cent of the vote in September 2019 the Austrian Greens made their first foray into federal government, forming a coalition with the conservative People’s Party.

Since then, Austria has become one of Europe’s most ambitious climate policy makers, pledging to be carbon neutral by 2040 and to switch to 100 per cent renewables by 2030.

Proposed policies include: a radical overhaul of the country’s public transport system; a reassessment of tax rates for big polluters; and a law incentivising clean energy use for citizens.

However, the coalition has not been without controversy and the Greens have had to make concessions on immigration, a difficult sell to some of their more left-wing members.

Germany: Time for a change?

Europe is holding its breath to see the results of the German election in September 2021 which will see the exit of long time leader Angela Merkel.

In the running for Chancellor is the Green party’s first ever candidate Annalena Baerbock.

Baerbock, who is often compared to New Zealand’s Jacinda Ardern and the Finnish Prime Minister Sanna Marin, has seen the party pull in front of the centre-left SDP in the polls.

The party has ambitions to cut greenhouse gases by 70 per cent by 2030 (the current target is 55 per cent) and oppose the Nord Stream 2 pipeline, which brings natural gas from Russia to Germany. The Greens are pro-digitisation of the German economy and stand on a platform of gender equality and anti-racism.

The party has long been plagued by a division between the pragmatic “Realos” and the idealistic “Fundis”, but Baerbock has a tight hold of party discipline for the former group.

Could this see them joining an Austrian-style coalition with Merkel’s CDC? Only time will tell.