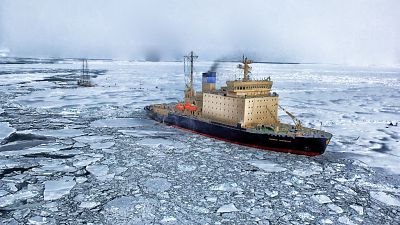 Ocean bacteria in the Canadian Arctic is capable of biodegrading diesel and oil, according to a new study.

Scientists at the University of Calgary found “unexpected” microbes in the icy waters of the Arctic which they say would respond well to an oil spill in the region. The study’s findings were published in the Applied and Environmental Microbiology journal.

Paraperlucidibaca, Cycloclasticus, and Zhongshania, types of bacteria which live in the Labrador Sea, are able to break down the fossil fuels present. They clear up the ocean, ensuring that it remains a vital resource for surrounding Indigenous communities.

Coauthor of the study Dr. Casey Hubert, an Associate Professor of Geomicrobiology at the university, explains that it was one of his students who alerted him to the problem.

Sean Murphy, who grew up in the region, instigated the project after recognising the complex relationship the people of Newfoundland and Labrador had with offshore oil. It brought them benefits in the form of fuel, but the community had been deeply troubled by the Deepwater Horizon oil spill in 2010.

As a result, Murphy focused his Master’s research on the Labrador Sea to “help inform future oil spill mitigation strategies… at cold temperatures in the region.”

How did scientists conduct the experiment?

In the study, investigators simulated oil spill remediation inside of bottles, by combining mud from the top few centimetres of the Arctic seabed with artificial seawater and either diesel or crude oil.

The experiments were performed at 4°C, to approximate the temperature in the Labrador Sea, and were left for several weeks to see what would happen.

Our simulations demonstrated that naturally occurring oil-degrading bacteria in the ocean represent nature's first responders to an oil spill.

Essentially all pre-spill strategies, whether in the Arctic or elsewhere, identify prevention as the most important factor.

But response plans in the event of an emergency are equally as important, as was seen in March this year when the Israeli government was “not prepared” for a massive oil spill cleanup on its shores. A spill in Mauritius in 2020 also threatened the security of the island nation, leading to citizens resorting to using hair and stockings to limit the damage on beaches.

The impetus behind this Canadian Arctic study was that these “permanently cold waters” are seeing increasing industrial activity related to maritime shipping and offshore oil and gas.

So the discovery of this fossil fuel-eating bacteria is crucial if we are to keep the region and its people safe in the future.

The Labrador coast is important for Indigenous peoples who rely on the ocean for food.

The Labrador coast is important for Indigenous peoples who rely on the ocean for food. Unlike at lower latitudes, there has been a lack of research on bioremediation this far north - until now, adds Dr. Hubert.

"As climate change extends ice-free periods and increasing industrial activity takes place in the Arctic, it is important to understand the ways in which the Arctic marine microbiome will respond if there is an oil or fuel spill," he continues.

It's especially significant, as "this region remains vast and remote, such that an oil spill emergency response would be complicated and slow."