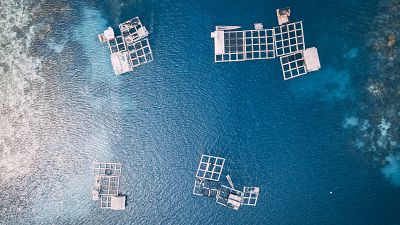 Over 70 per cent of the world’s surface is covered in water, and it didn’t take humans long to realise the ocean’s potential as a resource and exploit it.

We eat around 144 million tonnes of fish per year. That’s more than double the amount we ate 50 years ago, and demand is only expected to increase as the world’s population grows.

We have long treated the ocean as a pit of limitless resources, but overfishing has become one of the main drivers of the decline of ocean wildlife, which represents 80 per cent of the planet’s biodiversity according to the United Nations’ Food and Agriculture Organization.

Fortunately, since the 1980s, the amount of fish caught at sea has stagnated. This is due to aquaculture, a practice that has been positioned as a successful alternative to satisfy the growing consumer demand for fish while preserving wild stocks.

Aquaculture or “aquafarming” is the farming of aquatic organisms in a controlled environment. It’s similar to agriculture, but with fish, oysters and algae instead of chickens and wheat.

Globally, aquaculture recently surpassed wild capture fisheries, but the EU aquaculture production and consumption have not grown at the same pace as in other parts of the world, according to a new report by the Joint Research Centre (JRC), the European Commission's science and knowledge service.

Click play on the video player above to watch our explainer.

European aquaculture is renowned for its high quality, sustainability and consumer protection standards, but the bloc’s production only covers 20 per cent of the seafood consumed by its population and accounts for less than two per cent of world production. Asia rules the seas in the aquaculture industry.

Europeans are still highly dependent on imported seafood. And 70 per cent of the seafood that the EU produces comes from only four member states: Spain (27%), France (18%), Italy (12%), and Greece (11%), according to stats provided by the European Commission. There is thus an enormous potential for growth and diversification.

Aquaculture is a complex activity that involves many elements, from the use of space and water to the health care and welfare of farmed animals, ensuring the safety of products used in the farming process (such as feed or veterinary treatments).

“The aquaculture that we perform in the European Union follows very, very strict regulations and rules on environmental footprint, on food safety, on animal welfare, on workers' safety,” says Javier Ojeda, Chair of the Aquaculture advisory council. But he says, “these strict regulations in Europe are not always followed in other parts of the world.”

In past decades, many aquaculture farms around the world have forgotten and cast aside the environmental cost. In many places, the practice of sea farming has become a big polluter, contributor to climate change, and has increased concerns over the use of antibiotics in aquafarms.

We've started to understand that intensive industrial agriculture is not a good thing and has many, many problems

Lara Barazi
CEO and President of the Board of Kefalonia Fisheries S.A., which aims to protect the Greek island.

“We have to take those lessons and make sure we don't repeat the same mistakes for aquaculture.”

Barazi is proud to say that how oceans and waters are farmed in Europe is globally unique.

“People often confuse aquaculture as it's done in countries where there may not be as much regulation or with species that are not properly managed. [In the EU] we have some of the strictest and most comprehensive regulations for sustainable production and environmental protection,” she says.

A large bulk of EU legislation covers all kinds of matters around aquaculture. And the European Commission has recently adopted a new set of guidelines for the development of the sector. The main goal is for EU aquaculture to grow “more competitive and resilient”, becoming “the global reference in terms of sustainability by 2030”.

The revamped recommendations want to facilitate access to space and water so that EU aquaculture can keep growing, improve measures regarding animal health and welfare, promote information to consumers and citizens on EU aquaculture, while at the same time limiting the impact of the activity by promoting the types of aquaculture that are most beneficial for the environment.

The reform, strictly aligned with the EU’s Green Deal, wants to make a transition to more sustainable food systems, reversing the loss of biodiversity, reducing pollution and creating jobs in coastal and rural communities.

It is clear that fishing alone is not a smart and sustainable solution to provide the world with a healthy protein source.

The Food and Agriculture Organization found that a third of commercial fish stocks were fished at biologically unsustainable levels in 2017.

“We have to support the most sustainable and circular ways of getting the nutrition that we need from the oceans in a way as to improve our environment, ideally, certainly not to affect it negatively,” says Barazi.

And foodies should fear not.

“Aquacultural products are super fresh, do not compromise flavour, and offer the best taste from the Atlantic all the way to the Danube, besides being safe and nutritious,” says Ojeda.