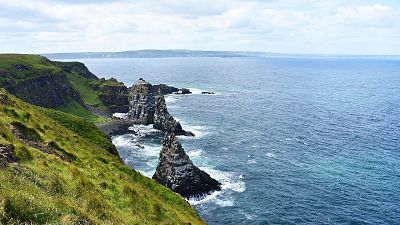 Rathlin Island is an island and civil parish off the coast of County Antrim in Northern Ireland.   -   Copyright  Canva
By Euronews  with AP  •  Updated: 13/08/2021

Northern Ireland's remote Rathlin Island has pledged to become carbon neutral by the end of the decade.

The island lies nine kilometres off the coast of Northern Ireland and has only been connected to the electricity grid since 2007.

About 150 people live on the island and they aim to produce their own wind and wave energy before 2030. They are hoping to demonstrate that carbon neutrality can be achieved quickly.

Underwater farmer Kate Burns is very conscious of climate change. She cultivates kelp in the biodiverse waters off Rathlin.

"It's not something away in the distance. It's actually something very scary and it's here and it's now. It's the biggest issue of our lifetime," she says.

_Watch the video above for the full details.
_