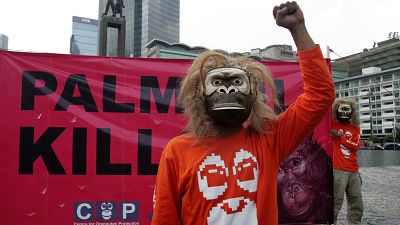 Activists are urging the Indonesian government to extend a moratorium on permits for new palm oil plantations.

The ban, which ends in September 2021, has lasted for three years and aimed to curb deforestation in the country, which is home to the world's third largest tropical rainforest.

Indonesia is the world’s biggest producer of palm oil, a ubiquitous ingredient which is used in products from bread to shampoo.

Palm oil is estimated to be responsible for 2 per cent of tree loss worldwide. In Indonesia 24 million hectares of forest (an area roughly the size of the UK) was lost due to palm oil practices between 2001 and 2017.

In 2020 it was found that there has been a decline in forest loss year-on-year for four years straight.

Ahead of COP26 in Glasgow later this year the south-east Asian island nation has created an updated national climate action plan to reach net-zero by 2060.

One of the reasons for the temporary ban on palm oil permits was to reduce the country’s carbon footprint.

"They (the government) have to extend it for longer as we still have the same problems," Yuyun Harmono, climate justice campaign manager at the Indonesian Forum for the Environment (WALHI) told the Thomson Reuters Foundation.

"Our main goal would be to have a permanent moratorium,” he adds.

In 2015 Indonesia suffered terrible wildfires which were largely caused by ‘slash and burn’ methods of forest clearance to make way for palm oil plantations. The resulting blazes destroyed rainforest and peat bogs, an important carbon sink.

In 2019, after noting Indonesia’s reduction in their deforestation rate, Norway began payments as part of a $1 billion deal to help the country cut emissions.

The temporary moratorium was aimed at curbing the risk of these fires.

Deforestation around the world

Last year an area of tropical forest the size of the Netherlands was destroyed worldwide, and reports have emerged that the Amazon rainforest is now a net-carbon emitter thanks in large part to the fires.

Such blazes are often deliberately started to clear the way for soy bean and beef production.

But Indonesia is ahead of other tropical forest hosting nations such as Brazil, where deforestation is still a large issue.

European countries are no better, with Germany having lost 7.5 per cent of its tree cover since 2000.

Tree planting, rewilding and reforestation are keystones of many countries' carbon reduction plans. In 2020 an International Union for the Conservation of Nature (IUCN) progress report showed 61 nations have made non-binding commitments to restore more than 210 million hectares of forest, an area roughly six times the size of Germany.