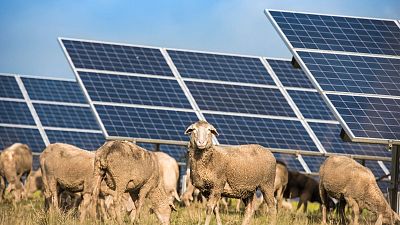 An Austrian solar farm is combining rewilding and low carbon energy by introducing sheep to mow the grass.

The Schafflerhofstrasse PV plant, Vienna, is bringing in 90 sheep to trim the 12-hectares of grass around the solar panels.

It is hoped the sheep will contribute to rewilding by providing natural fertiliser and carrying seeds and pollen in their wool.

The ‘eco-friendly lawn mowers’ will be able to shelter under the panels, which are higher off the ground than usual, providing perfect shade from the sun and protection from the rain.

The plant is the largest in Austria - generating 12 gigawatt hours of clean electricity for 4,900 Viennese homes - and saves 4,200 tonnes of CO2 per year.

It is part of the plan to keep Vienna on track for carbon neutrality by 2040.

The site was previously a gravel dump for the city so the ground was prepared with a special seed mixture prior to introduction of the sheep, who will winter in a nearby barn.

Created by Wein Energie, and soon to be part of a citizen solar power scheme, the project is one of several agrivoltaic systems in place in Austria.

What does agrivoltaic mean?

Agrivoltaic methods combine solar energy production with agriculture. It is a way of optimising land use without damaging ecosystems.

Agrivoltaic experiments are underway in Colorado, USA and have been successfully used in vineyards in France. In the case of crop growing, an algorithm is sometimes used to judge the water and sunlight needs of plants and adjust the angle of the solar panels accordingly.

Microclimates created by solar panels mean that plants growing beneath them may need less water, and the energy produced by the panels can be used by farmers for irrigation.

Although the concept is in its early stages it is thought that by using agrivoltaic methods crop farmers could increase profits by 40 per cent.

Who else is using ‘eco-friendly lawn mowers’?

Sheep are now used to cut grass in France after a successful trial in a Paris park in 2013, with an urban flock of sheep resident in the city since 2012.

“By grazing, they cut hedges, regulate lawns. Unlike goats, which eat everything, sheep eat only the greenest parts of hedges and meadows,” says Guillaume Leterrier, co-founder of Paris cultural media Enlarge Your Paris.

“They are indeed gardeners but also landscapers since they intervene in public spaces.”

Likewise, Google raised eyebrows in 2009 when they rented goats to mow the grass of their Californian headquarters from a company now called Living Systems Land Management.

Eco lawn management is a growing sector with several hundred rental companies operating in the US alone, according to Forbes.