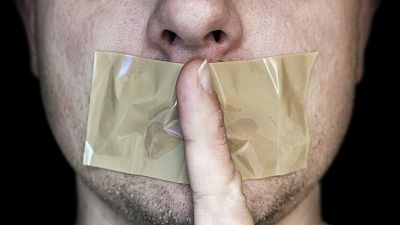 Christopher Sebastian is a journalist, technical writer, and digital media researcher. He is based in New York and Prague. As a longtime vegan himself, he gives us his take on how veganism and conspiratorial thinking intersect.

Attila Hildmann is one of Germany's most dangerous conspiracy theorists. And with over a million books sold, he is also one of Germany’s most successful vegan cookbook authors. Frequently seen in public with flags from the German empire (1871–1919), which is used by right-wing extremists because the swastika is forbidden, he recently made headlines with a hate campaign against science journalist and chemist Mai Thi Nguyen-Kim for reporting about COVID-19.

Under investigation by the Berlin public prosecutor’s office, Hildmann has now fled to Turkey. But he didn’t go quietly. He posted around 500 times to his channel on the encrypted messaging app Telegram. In his many postings, he makes repeated calls for violence against the German state and relentlessly targets the Jews, whom he views as "inferior human beings."

Those messages go out to nearly 120,000 followers.

At first glance, conspiratorial thinking and the veganism may not seem like very natural bedfellows. But Hildmann is not alone.

There’s a flourishing segment of the vegan community that embraces both wild beliefs and plant-based eating. Fully Raw Kristina (real name Kristina Carrillo-Bucaram) is another vegan influencer who has a tenuous relationship with provable reality. She hasn’t gone so far as to say the moon landing was faked. But she does make dubious unsubstantiated health claims, such as that a raw food plant-based diet can change your eye colour.

Like Hildmann, Kristina was accused of anti-Semitism for not distancing herself from her notoriously anti-Semitic vegan mentor John Rose.

She has over a million followers on both YouTube and Instagram. Perhaps her following is larger because she doesn’t foreground overtly anti-Semitic beliefs herself. But as the argument goes, tolerance for anti-Semitism is anti-Semitism itself.

To be clear, bigotry is not a necessary component of vegan conspiracy theories. It just helps. If you draw a Venn diagram between the wellness community, pseudoscience, and lifestyle veganism, anti-Semitism emerges as a theme commonly enough to make some Jewish people uncomfortable. Hildmann represents the physical manifestation of that Venn diagram.

It should also be noted that there is a not-insignificant portion of the vegan community who is continually frustrated by scientifically baseless beliefs. They even coined a term for people who adhere to this bigoted mindset, woogans—a portmanteau of “woo” and vegans.

They even coined a term for people who adhere to this bigoted mindset, woogans - a portmanteau of “woo” and vegans.

While there is no universally agreed upon definition of a woogan, in simple terms it is a vegan who believes in “woo-woo” ideas. A woogan may be vegan for ethical reasons, climate, or health. But additionally they hitch their veganism to an alternative lifestyle in opposition to the mainstream. Hildmann’s ideology would fit that definition.

But what is it that makes him so popular? It is possible that people mentally separate Hildmann’s conspiratorial beliefs from his food. Indeed, many fans maintain an attachment to Harry Potter but carefully distance themselves from the trans-exclusionary feminism of JK Rowling. But unlike Harry Potter, there’s more than one resource for a decent cashew-based cheese recipe.

So do people come for the extremism, but stay for the cauliflower steak? Or do they start with the veganism and stick around for the flat-earth theory?

Which came first - the (veggie) chicken or the egg (substitute)?

Berlin-based sociologist Jeff Mannes thinks it’s not either because these things are not mutually exclusive. He says, “Conspiracy ideologies can be stand-ins for an emotional need to feel special, chosen, or woke when compared to the stupid, ‘brainwashed’ others. They are about serving that profound and unaware psychological need to feel special. But, crucially, veganism does this too.”

Having both conspiracy and veganism present in Hildmann makes him an attractive figure for certain vulnerable people to coalesce around.

Conspiracy ideologies can be stand-ins for an emotional need to feel special, chosen, or woke.

Jamie Woodhouse echoes this sentiment. Woodhouse, who lives in London, runs the website Sentientism, which he describes as a philosophy based on evidence, reason, and compassion for all sentient beings. But he also speculates that some conspiratorial thinking among vegans can be rooted in a positively motivated reverence for the natural world as a pure, perfectly balanced place. He describes this as an extension of the naturalistic fallacy.

“While reverence for the natural world can be healthy, there's a danger in then assuming that everything that happens in nature is inherently virtuous.”

Woodhouse goes on further to acknowledge that this naturalistic fallacy can lead to dangerous ethics. Covid, for example, is natural. That doesn’t make it good.

Covid-19 is one of Hildmann’s favourite hobby horses. He’s described the use of face masks to minimise transmission as “slave masks” and gone on record as saying, "Hitler was a blessing compared to the communist Merkel, because she is planning a global genocide of 7 billion people with [Bill] Gates."

Dr. Trent Grassian, a social scientist and longtime vegan in Kent, England, actually suspects he had Covid. Although he has no way of proving it because widespread testing wasn’t available at the time he was ill, he still experiences symptoms of long-haul Covid some 10 months later. Due to this, he offers some insight into how the pandemic may have accelerated and metastasised conspiratorial thinking among vegans.

He explains it as “part frustration and part lack of control”.

“So a lot of people come up to me saying ‘How could we have known who saw this coming?’ And the reality is that many people did see this coming. You know, many scientists, health practitioners, and activists have been talking about pandemics, not as this abstract notion in a horror film, but as a very real, very present threat that was being ignored.

And we're still not talking about the underlying causes of [zoonotic diseases] or what we're going to do to prevent this from happening in the future. I think some [vegans] can feel quite helpless.”

Of course, Grassian is referring to the evidence that zoonotic diseases like COVID-19 can be linked to humans crowding animals together in unnatural conditions, an observation that vegans have been making for quite some time.

He contends that being ignored by the mainstream could contribute to a tremendous loss of faith and trust in the media, the government, and institutions.

This makes it easy for people like Hildmann to step in and fill that void created by that loss of trust. It provides people with a distinct group identity that makes them feel safe.

He says, “I got involved with Vegan GMO in 2014. At the time we were just three people frustrated with all the disinformation in vegan spaces about a really neat technology.”

It provides people with a distinct group identity that makes them feel safe.

Merkley says the collective started as a modest social media page where they tried to share science-based articles that debunked the false stuff they'd been hearing. People would tag them when dubious claims about GMOs surfaced on posts, which would give them a chance to come argue their case. Over time, they gained a dedicated following that allowed them to recruit more science-loving vegans and become a more ambitious activist organisation with help from the Cornell University Alliance for Science.

In Merkley’s estimation, their group had unintentionally stumbled into this successful formula of group-identity-based outreach. He lays out a compelling explanation for how conspiracy thinking takes root in vegan spaces.

“Based on what I see online, a lot of people are under the impression that veganism is a cure-all for everything from cancer to racism. It's a claim that has brought a lot of people into the plant-based movement. I think it's interesting that a lot of animal-liberation vegans who don't necessarily believe these health claims frown on attempts to debunk them.

The reasoning is that it doesn't matter why people go vegan if the end result is less dead animals. It's another powerful appeal to our group identity and values. And so these bogus health claims take off really quickly without much resistance. You can find yourself suddenly surrounded by new plant-based vegans who've completely taken over the space and changed the narrative.”

So to the woogan and woogan-adjacent, the logic goes that if veganism is an exclusive club, then animal liberation cannot be possible because membership is based on putting human needs above those of other animals. So the exclusion of crackpots, health extremists, and literal Nazis alienates large swathes of the population. Their acceptance is a necessary albeit unfortunate one. This view may even be shared by vegan organisations. Three were contacted for comment, and none of them would comment on the record about Hildmann.

But the anti-woogan side isn’t buying it. They claim this logic is flawed because critical thinking and zero tolerance for bigotry are part-and-parcel of a healthy animal liberation ethic. Sure they want everyone to eat plants, but woogans should do so quietly.

So to the woogan and woogan-adjacent, the logic goes that if veganism is an exclusive club, then animal liberation cannot be possible because membership is based on putting human needs above those of other animals.

Merkley also offers helpful insights when talking to people who hold extreme beliefs, vegan or not. “Listen to them. Ask questions. Not gotcha questions but questions that demonstrate a good faith effort to understand their concerns. Don't stop at the stated concerns, which might be things that aren't actually happening. Dig down deeper.

Figure out what is the underlying concern or anxiety. What real or perceived injustice has created the trust vacuum that opened the door for conspiracies? Find common ground, commiserate, acknowledge real harms.”

In fact, these thoughts were also shared by Woodhouse and Grassian. They urge people to choose their battles carefully when engaging. Don’t lead with statistics, facts, and science. Facts may not care about feelings, but feelings care surprisingly little for facts. And most importantly, be humble. This is not an opportunity to uplift yourself by winning an argument.

While keeping a broad church is surely unsustainable, it’s unclear how the vegan community can reckon with their more extremist members. Scepticism is not, and should not be, unwelcome. After all, if a person’s veganism is animated by empathy for animals who are killed to the tune of 70 billion land animals (and countless more fish and aquatic creatures), it’s perfectly reasonable to feel betrayed and to question authority.

Taken to the extreme, however, it turns into cynicism where charismatic leaders like Hildmann thrive.

Marla Rose, a Chicago vegan who strongly denounces woo from her platform Vegan Street, worded it best. "My son Justice has a saying. Scepticism is like coleslaw. Nice to balance the plate, but you don't want to go making a meal out of it."

Scientists have grown a clean, green superbug that eats sewage