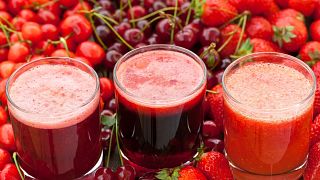 Consuming human placenta is reported to have a number of health benefits   -   Copyright  Getty via Canva
By Catherine Lofthouse  •  Updated: 01/02/2021

But one vegan from Hitchin, UK, is keen to get her knives out, as long as the organ in question is a freshly birthed placenta.

Sian Young runs 'Birth with Sian', helping individuals give birth in their homes. Her aim is to debunk some of the more far-fetched thoughts about placenta remedies, including the idea that they are not suitable for vegetarians and only available to celebrities like Kim Kardashian.

"I am a vegan and totally expect to raise a few eyebrows! Vegans avoid the exploitation of animals. Placentas belong to the person who has given birth and it is up to them what they do with it,” explains the mum-of-three.

“Preparing a placenta for a client in my opinion is vegan as there is no exploitation. I will not prepare placentas for anyone other than the birthing person.”

The doula and birth photographer calls the placenta an “absolutely incredible organ - one that supports the life of your unborn baby”. But crucially, she is a firm advocate for the health benefits it can bring mothers who consume it.

The placenta is rich in many nutrients like iron, vitamins, minerals, stem cells, growth factors and hormones.

“Its role doesn't have to end once your baby is born, as the placenta is rich in many nutrients like iron, vitamins, minerals, stem cells, growth factors and hormones. People find that when they consume their own placenta after birth, it contributes to a gentler and easier postpartum recovery.”

She recommends steaming the afterbirth with herbs and dehydrating it, before grinding it up to make capsules. A piece of placenta can also be steeped in alcohol or distilled water to make a tincture or essence that is believed to help balance hormones, even years after giving birth.

Birmingham midwife Siobhan Durkin, who offers placenta remedies in the Midlands under the name Pretty Little Placenta, has captured footage of the process of turning it into capsules.

"It seems logical that the nutrients and components of the placenta are already in the perfect format to be reassimilated by the owner. So for vegans, this is a very appealing source of much-needed nutrients right after birth," she says.

As placentophagy has become more widespread in recent years, champions of the practice have been pushing for better regulation in the preparation of placenta for human consumption.

Human placenta is legally classified as a food.

Last month, the Food Standards Agency (FSA) announced that human placenta is legally classified as a food due to its extensive history of personal consumption. It specified that those making remedies for new parents need to register with their local authority and be inspected for safety and hygiene.

What’s the history behind the afterbirth?

Originally, the idea behind tucking into the afterbirth came from observing the animal kingdom.

According to the Placenta Remedies Network, we can trace placenta preparations back to traditional, historical practices in Western and Asian medicine. The natural instinct to routinely consume placenta seems to remain prevalent in over 4,000 species of land mammal, but no longer in humans.

“As apes and other non-human primates within our genus routinely consume their placentas, the suggestion is that our move away from this practice is evolutionary,” the network states.

“Having discovered fire, women were largely responsible for keeping it going and woodsmoke contains cadmium, a heavy metal which we now know can build up in the placenta,” it continues. So the question is, did consuming our placenta immediately after giving birth make us sick, due to cadmium poisoning? Did we then develop a natural instinct to avoid consuming our placenta?”

Despite anecdotal evidence suggesting that ingesting afterbirth boosts milk supply and helps ward off postnatal depression, a study published by the Society of Obstetricians and Gynaecologists of Canada in 2019 found no evidence for impact on mood, energy, Vitamin B 12 levels or lactation.

Further studies are currently underway at the University of Nevada, Las Vegas, and Jena University in Germany to determine whether the suggested benefits can be supported by science.

A quest to help new mothers

“I have replayed my first baby's birth so many times in my mind: imagining different outcomes if I had done things differently, if I had known more about my choices, if I had understood what was going on,” she recalls.

“How would I have felt if I had been treated with humanity and compassion and dignity and respect? How different things might have been if I knew then what I know now, and if I had just been nurtured. That is why I became a doula.”

Sian decided to train to offer placenta remedies after looking into it for a client. She says she ended up reading about the process and benefits and found herself wishing she had done it with her own placentas.

As part of the care she offers after birth, keen baker Sian even presents a traditional groaning cake to new parents. It’s a British tradition (and a reference to the sounds women make during labour) to make a groaning cake for postpartum mothers.

"Baking a groaning cake at or after a birth is an ancient tradition surrounded by many old wives' tales to do with labour, birth, prosperity and fertility. But I simply like making this for my clients because it's packed with delicious, nourishing ingredients plus a whole lot of love, just what you need to keep those energy levels up postpartum."

It seems that a slice of cake with a side of placenta after giving birth might be just what the doula ordered.