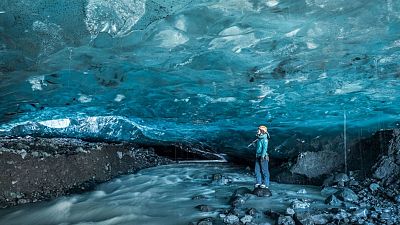 The effects of global warming are increasingly visible in Iceland as the landscape begins to radically alter.

The world-famous Jökulsárlón Lagoon in Iceland contains icebergs as far as the eye can see, with a glacier where huge blocks of ice are breaking away.

Tourists may find the glittering lagoon stunning, but the drifting pieces of melting ice on the surface carry a very alarming message.

Global warming is something that locals are watching unfold before their eyes. "It's very different after 40 years here," says farmer Sigurlaug Gissurardottir. "The glacier has receded two kilometres from our farm and it is also much thinner."

Glaciologists are alarmed because the lagoon is gaining 500 square meters per year.

"It's winter, we should have snow, it should be cold! But it is hot. It's almost like summer", says Icelandic guide Stephan Mantler.

If the glacier continues to melt at this speed, it will have lost 80 per cent of its surface in the year 2300.

On the frontlines of climate change

Today, a tenth of Iceland is covered with glaciers - including Europe's largest glacier, covering an area of 8,300 square kilometres, about three times the size of Luxembourg.

In 2019, the country held a symbolic funeral for Okjökull, its first glacier lost to climate change. Since 2014, Okjökull is considered to be just another mountain.

Scientists believe that some 400 glaciers are also at risk of disappearing.

The glaciers supply fresh water and much of the country's energy production also depends on them.

"A big part of our renewable energies is produced in the glacial rivers. That’s why the disappearance of the glaciers will affect our energy system," said Prime Minister Katrin Jakobsdottir at the funeral in 2019.

The melting of glaciers is expected to have a major impact on the country’s industries, from fishing to tourism.

The melting ice also has further previously unexpected impacts. The glaciers keep many volcanos in the country cool, which means there is the potential of more eruptions in the future.

The government has been investing millions of euros to increase carbon sequestration and accelerate switches to sustainable energy sources. Iceland aims to go carbon neutral by 2040.

Iceland on high alert for volcanic eruption after thousands of tremors