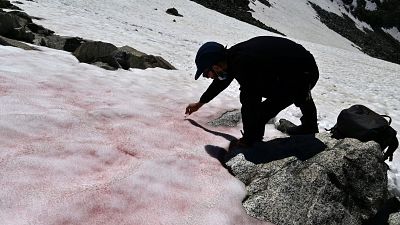 A type of algae usually found in Greenland has started to grow in northern Italy - and it’s turning the glaciers pink.

Despite its rosy appearance, pink snow isn’t good news on the climate change front. Usually, ice reflects over 80 per cent of the sun’s radiation back into the atmosphere. As the ice changes colour, it loses the ability to reflect heat meaning the glaciers are starting to melt faster.

The Presena glacier, near Pellizzano in Italy, is often called the “giant of the alps” and sits 3,069 metres above sea level. It has been described as a “paradise for all those who love nature, history and mountain sports.” Due to rising global temperatures melting ice on the mountains, the local ski resort Pontedilegno-Tonale initiated a conservation project in 2008. They use enormous pieces of geotextile fabric to cover up the glaciers all summer, keeping them cold and protecting from melting.

However, despite their best efforts, the glacier now faces a new threat in the form of algae. According to Biagio Di Mauro of Italy’s National Research Council, the pink snow is likely caused by an organism which thrives in Greenland’s ‘Dark Zone’. This is an area where ice is also melting, causing a widespread darkening along the western margin of the ice sheet.

“The alga is not dangerous, it is a natural phenomenon that occurs during the spring and summer periods in the middle latitudes but also at the Poles,” Di Mauro told the Guardian in an interview.

However, “everything that darkens the snow causes it to melt because it accelerates the absorption of radiation,” Di Mauro continued.

The algae was first thought to be Ancylonema nordenskioeldii (a glacier alga), but Di Mauro clarified in a tweet that it is more likely to be Chlamydomonas nivalis (a snow alga).

Are the Alps melting for good?

Last year, a study estimated that two-thirds of glacier ice in the Alps will melt by 2100. The research, published in the journal The Cryosphere, warned that half of the ice on the mountain chain’s 4,000 glaciers will be gone by 2050, and two thirds will have melted by 2100, due to damaging effects of worldwide carbon emissions.

Unsteady glaciers also pose a threat to Alpine towns and tourist areas. Scientists have developed “an intimate understanding of how glaciers behave”, Fabian Walter, a seismic glaciologist at ETH Zurich told the New York Times in 2019. But there is still “a lot we don’t understand about how, why or when a particular body of ice might collapse,” he says. “With climate change, the landscape is evolving in ways that are difficult to anticipate.”

Significantly reducing our reliance on fossil fuels is the best way to stop ice from melting in places like the Alps and the Arctic. A 2019 study found that emissions generated from burning fossil fuels make up the biggest cause of ice melting in the Arctic, due to an accumulation of “black carbon”.

According to the World Resources Institute (WRI), the most effective ways to transition to a cleaner, greener world include “putting a price on carbon” so that fossil fuel production isn’t subsidised. The institute also recommends that we invest more in energy efficient buildings, improve access to electricity all over the world and create the conditions for phasing out coal altogether.

This kind of bold climate action could deliver at least $26 trillion in economic benefits through 2030, claims the WRI.