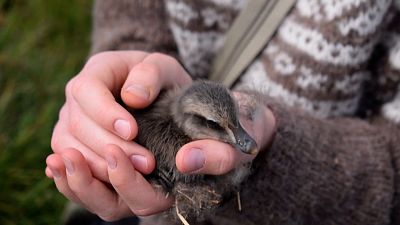 On a remote island off the west coast of Iceland, an old tradition of hunting for elusive eiderdown is providing one of the most ethically sourced fillings for duvets and quilts.

Every summer, nearly 400 Icelandic farmers comb through hollow surfaces in the rock, on the sand or in the tall grass to unearth a few handfuls of the grey feathers of this polar duck.

Icelandic eiderdown is seen as a sustainable, ethical down because it doesn't harm its feathery owners when it’s gathered. In fact, the farmers protect the birds from natural predators and since 1847, the eider has been fully protected in Iceland, as stealing its eggs is prohibited.

On the island of Bjarneyjar the practice is said to have started when Vikings from Norway settled on the island at the end of the 9th century.

The feather of the eider, a sea duck from the subarctic oceans, is a natural treasure: one of the warmest natural fibres on the planet, both light and highly insulating. The female releases the down from her breast and lines her nest with it to insulate it during incubation.

Once the down is not needed by the animals, the farmers start the meticulous work of picking up the feathers then drying and cleaning them thoroughly.

Worldwide, the annual harvest of eiderdown is no more than four tonnes, three-quarters of which comes from Iceland, by far the world's largest producer, ahead of Canada and other countries bordering the Arctic.

Watch the video to see how the annual harvest takes place.

The best shots from the Astronomy Photographer of the Year competition

Could a four-day week pave the way towards a more sustainable future?

On thin ice: How global warming is threatening Iceland's glaciers