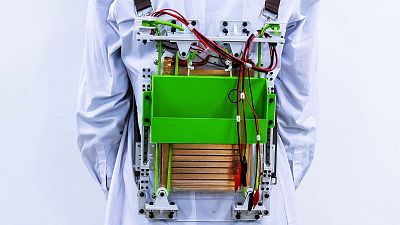 Researchers in China have developed a backpack that turns the energy of walking into electricity.

Backpacks that can generate energy have been made before, but previously they have been relatively inefficient - meaning the power output was low. This new prototype generates enough electricity from walking to power an electric watch.

It has “promising potential to be a power source for small-scale wearable and portable electronics, GPS systems, and other self-powered health care sensors,” according to the study.

Zhong Lin Wang, Jia Cheng and their colleagues wanted to create something that also made it easier to carry a heavy bag. Alongside generating energy to power a torch or even your smartwatch on a long hike, the prototype also makes whatever you are carrying feel around 20 per cent lighter.

Once the efficiency of the backpack is improved, the researchers believe that it could be useful for athletes, explorers and even those involved in disaster rescue efforts where there is no access to electricity.

How to generate electricity from human movement

The tech that makes this possible is called a triboelectric nanogenerator (TENG). It’s a small scale generator that can turn movements like human motion, vibration from machines or vehicles, wind and wave energy into electricity. TENGs make use of an effect we all typically experience in our daily lives, usually when taking our clothes out of a dryer.

Two pieces of material, usually plastic, rub together from these low frequency movements creating a static charge. This charge is then harvested and can be used to charge low-power devices.

Aside from potentially meaning you may never have to charge your smartwatch again, it has some useful applications for renewable energy. TENGs are low cost and mean all kinds of otherwise wasted energy can be put to use.

In 2019 scientists added them to solar panels to allow them to generate electricity at night from rainfall. Similar electromagnetic generators have also been used to turn pavements, roads and even dancefloors into energy sources.

Experts say that it would be “impossible to power the world on human energy alone”, but they believe the tech has applications in the future. With smart cities being built around the world, they are confident that more and more urban planners will start to look into the possibility of harvesting the energy of movement.