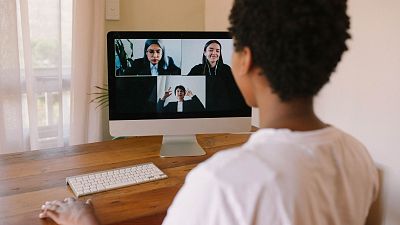 Leaving the camera off during a video call could cut your environmental impact by up to 96 per cent.

A new study from Purdue University in the US estimates that an hour of videoconferencing or streaming emits between 150 and 1000 grams of carbon dioxide. It also uses up to 12 litres of water and an area of land around the size of an iPad mini.

Researchers found that leaving your camera off doesn’t just mean you can hide your messy home from colleagues - it could be helping to cut your carbon, land and water footprints. Streaming videos in standard definition rather than high definition may result in an 86 per cent reduction

This is the first study of its kind to investigate how internet infrastructure affects water and land use, not just carbon emissions. It estimated the carbon, water and land associated with each gigabyte of data used across platforms like YouTube, Zoom, Facebook, Twitter and TikTok or when online gaming and surfing the web.

The conclusion was fairly straightforward: the more video involved, the higher the footprint.

“Banking systems tell you the positive environmental impact of going paperless, but no one tells you the benefit of turning off your camera or reducing your streaming quality,” said Kaveh Madani, who led the study.

“So without your consent, these platforms are increasing your environmental footprint.”

Processing and transmitting the data that beams your face across the planet to your boss’s living room takes a lot of electricity. The data centres that process and store this information are slowly becoming more efficient but producing energy will always have carbon, water or land footprints attached to it.

Taking a holistic look at our internet usage

The researchers found that estimated carbon emissions, water consumption and land usage varied. Both the web platform you were using and the country you are in have an impact. Germany, for example, had much higher water and land footprints than others despite being a world leader for renewable energy.

Purdue Professor, Roshanak Nateghi, works to uncover gaps and assumptions in our understanding of energy that can lead to underestimating the effects of climate change. She says that focusing on one type of footprint can make us “miss out on others that can provide a more holistic look at environmental impact.”

She also points out that these estimates are rough; they are only as good as the data available from internet service providers. The team hopes, however, that this information will help to draw people’s attention to the potential environmental consequences of our increased internet usage during the pandemic.