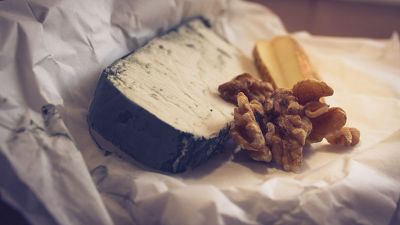 There's no doubt that cheese- the dairy variety at least, is addictive.

A protein present in our favourite pizza topping called casein attaches to dopamine receptors making us crave similar foods. No wonder, then, that it is one of the things that people find the hardest to leave behind when they go vegan.

Thanks to our unchecked cheddar addictions and an increasing desire to do good by the planet, vegan alternatives have increasingly become a staple on the supermarket shelf. In the US there has been a nearly 70 percent increase in sales of plant-based cheese in the last two years and demand was so high for one brand after it was launched in the UK in September 2019 that it briefly overtook its dairy counterpart.

The problem is that many of these impersonators just aren’t as good as the original product. Melty mozzarellas used on vegan pizzas stick to your teeth in a disgustingly artificial way and other everyday options tend to be pretty bland. Often made from coconut oil and starch, there’s no doubt they have achieved the correct visuals but lack the essential umami cheese flavour. They just aren’t as good as the real thing.

There are those, however, who are trying to turn dairy-free alternatives into something a bit more special. Instead of the mass-produced, processed supermarket options, a select number of artisanal brands are trying to recreate the luxurious experience of a well-aged Gouda. With their own bacterial cultures and handmade cheese techniques, these dairy alternatives are anything but bland.

If authenticity is what you are searching for, then some options are scarily close to the original thing. Honestly Tasty’s “Veganzola” is a crowd favourite at east London vegan cheesemonger La Fauxmagerie who call it a ‘converter cheese’; one that might even convince your dairy loving friends to give it a go. Created from a mix of almonds and the same Penicillium Roqueforti mould found in the best blue cheeses, what it lacks in texture it makes up for in funky aged flavour.

The London brand was started by Mike Moore when he filled up his flatmate’s fridge with a whole host of plant-based experiments. Some of them turned out pretty good so Mike decided to quit his job and give selling them a go. In their range of recreations, Honestly Tasty also makes a “Shamembert” complete with a decent looking rind.

Once studded with herbs, drizzled with vegan honey and baked in the oven, it has the same gooey texture as the traditional French favourite. Although it isn’t quite as satisfyingly smelly as a ripe Camembert, the runny interior is great slathered on a piece of crusty bread.

Based in Hackney, London, Nivi and Angela are a couple who are hoping to go beyond simple recreation of the cheese varieties we are used to and instead focus on the essence of cheesemaking itself.

“That experience is missing from a lot of vegan food which only tries to make the meat-free or dairy-free version of something,” says one half of the duo and chief recipe experimenter, Angela.

Nivi, Angela’s partner, was interested in going vegan after they met but giving up cheese was a seemingly insurmountable sacrifice.

“As an Italian, he didn't believe a life without cheese was possible,” Angela says, “so I made it my mission to prove him wrong.” He fell in love with her creamy cashew creations and never looked back.

I Am Nut OK make their cheese in small, handmade batches. Their own bacterial cultures are blended with cashew nuts, fermented and then left to age. “Our products are different than dairy cheese as we don't try to replicate dairy flavours,” says Angela, “we want to make deeply flavourful umami products that will hit the spot.”

Of all their inventions the most unique is NeroMinded, a completely black, truffle heavy product built around a fermented cashew base. Garlicky and cheesy, its flavour is enhanced by a vegan staple, nutritional yeast.

It is everything but boring. A world away from dairy flavours, it undoubtedly achieves something distinct from the usual plant-based cheese palate.

Distancing themselves from the widely available brands, a common theme among the chefs I spoke to is a desire to change the perception of vegan cheese.

“I wanted to have a go at making artisan vegan cheeses as I felt the ones available in supermarkets were not very good and were very processed,” says Angel Ashcroft of Strictly Roots Vegan. In addition to another great blue cheese option, the brand also produces some innovative flavour combinations.

Angel says their most experimental option is the “Bombay Banger”, a combination of cashew and coconut bases packed full of toasted Indian spices. Dusted in a sour mango powder, she recommends trying it with poppadoms and carrot chutney.

Making vegan cheese has become a passion for Angel.

“I started making basic cheeses using nuts and probiotic cultures and then moved on to experimenting with long-aged, mould-cultured cheeses.”

By experimenting with different bases, everything from soya milk to almonds and coconut, the chef has created an impressive range of flavours for a brand that is less than a year old. Most are slow aged meaning they are packed full of probiotics. That makes vegan cheese practically a health food, right?

That’s what I’m telling myself anyway.

Are you being misled?

As these plant-based alternatives gain momentum so too does opposition to what they are doing. After vegan cheesemonger La Fauxmagerie opened their new shop in 2019, the dairy industry raised concerns that customers could be being misled.

Dairy UK’s argument was that by using the word ‘cheese’ these vegan brands are exploiting the supposed health benefits of dairy that customers expect.

What these artisanal brands are doing, however, is moving vegan cheeses away from merely being substitutes or potentially misleading replicas.

For those who choose not to or simply can’t eat dairy, artisanal vegan chefs are recreating the cheese experience without necessarily trying to copy the dairy original.

You're starting Veganuary, does it really cut the food miles?