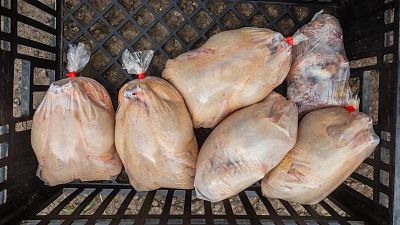 More than 60 million chickens were rejected from UK slaughterhouses between 2016 and 2019 due to disease and defects, according to new figures.

The data highlights the poor conditions in the British poultry sector, based on joint analysis by the Bureau of Investigative Journalism (TBIJ) and the Guardian. Worst affected were broilers, chickens raised for meat. Nearly 40 million broilers arrived at slaughterhouses in England and Wales over the three year period, only to be turned away for carrying diseases - that’s around 35,000 every single day.

The Food Standards Agency (FSA) deemed that either part of the bird or the whole bird was not suitable for human consumption.

But this is nothing new. In 2018, experts feared consumers were at increased risk of food poisoning from the millions of chickens sold in the EU. This came after the European Commission proposed less stringent checks on individual poultry carcasses sold.

The volume of food poisoning cases was described as “already unacceptable” at the time, due to contamination and bacteria carried in the intestines of birds. During slaughter, these organisms “are sometimes ruptured causing the spread of visible faecal material onto the carcasses,” explained Ron Spellman, deputy secretary general of the European Association of Food and Meat Inspectors (EWFC) to TBIJ.

Food safety authorities are also concerned about the future of British poultry as the UK looks to secure a trade deal with the US, one which could include chlorinated chicken. The European Commission warns of the risks of eating chlorine-washed chicken, as consumers could potentially be exposed to harmful levels of the chemical compound chlorate. This is particularly a concern when it comes to children.

So is it time to switch to a vegan diet? No one wants food poisoning, but apart from the health benefits, research suggests that switching to a plant-based diet is also the “single biggest way” to reduce your environmental impact on the planet.

If you’re considering making the move, here are some things you need to know…

Once you’ve decided to do something, it can be easy to jump in head first with little regard to the practicalities of it all. However, if you’re thinking of going vegan it’s best to introduce small changes to your diet gradually. “Making the change from your normal diet to a vegan diet can be very drastic and it’s important to make this switch slowly and in your own time," advises nutritionist Jenna Hope.

Not only are you more likely to stick to your new lifestyle in the long run, she says, but it’s also better for your body.

“You should be aware that if you’re taking on more of a plant-heavy vegan diet this can drastically increase your fibre intake,” she explains. “Making significant increases in your fibre intake overnight can shock your gut and provide unwanted gastrointestinal distress. Therefore, focus on slowly increasing your fibre intake over the course of a few months to prevent any surprises or gut symptoms.”

It’s also important to ensure you’ve taken the time to research what nutrients your body may be lacking after switching to a plant-based diet so you can ensure you are getting enough.

As mentioned above, cutting out meat and dairy from your diet does mean that you may be lowering your intake of certain nutrients. In this case, supplementing your diet with vitamins can be a good solution.

“The most important nutrient you miss out on when you go vegan is vitamin B12. This is a vitamin that is important for red blood cell production and for brain development, and is almost exclusively found in animal products,” explains nutritionist and food blogger Pixie Turner. “While you can buy fortified plant mylks and other fortified food items, I recommend taking a daily B12 supplement to ensure you're always getting enough, no matter how many fortified foods you eat. This is especially important if you are pregnant, planning a pregnancy, or breastfeeding.”

Other nutrients you may be at risk of becoming deficient in include vitamins A and D, calcium and iron. And don’t forget about omega-3s too.

“Omega-3 is an essentially fatty acid generally found in oily fish,” Pixie says. “There are a number of vegan sources available, including foods like walnuts, hemp seeds and flaxseed. If those foods don't feature in your vegan diet regularly then it's worth considering a vegan omega-3 supplement, which is usually made from algae.”

Sometimes even the most surprising foods can be unfriendly to vegans, so it’s important to get used to checking ingredient lists. “When you start to make the transition to veganism you’ll probably need to check labels of everything you’re eating as milk and animal products can sneak their way into many food items,” Jenna advises. “Items such as pre-packaged vegetable soups often contain milk or cream, many sweets contain gelatine and even wine often contains traces of milk. Luckily, due to the rise of the vegan diet there are many vegan friendly products on supermarket shelves and even some restaurants have vegan menus now.”

And don’t forget that many items on the supermarket shelves are actually already vegan – even those you may not think would be (Oreo cookies anyone?). Follow @AccidentallyVeganUK on Instagram and check out Vegan Food and Living’s list of vegan supermarket products for some handy tips.

4. You can be an unhealthy vegan

“There’s a common misconception that a vegan diet is a healthy one but this is not necessarily the case,” Jenna says. “There tends to be two main types of vegans, those who live off chips, soya nuggets and vegan sausages and those who fill their diets with plants, beans, nuts, seeds and wholegrains. It’s important that you don’t simply replace animal products for processed vegan alternatives.”

If you want to be as healthy as you can, avoid filling up on snacks and processed foods and instead opt for natural wholefoods, which contain plenty of nutrients.

5. You don't have to stop eating out

You might think that if you’re vegan you’re doomed to never go out for dinner again. However, this simply isn’t the case, as Serena Lee, founder of Vegans of London @vegansofldn, explains. “Eating out has only got easier over the last five years or so,” she says.

“Veganism, as a movement, has grown like never before, and restaurants are taking note. It’s rare now to go to a restaurant and not find a single vegan option on the menu and, if there’s nothing at all, it’s simple for most kitchens to put together a plant-based option. I dedicate a lot of time to sharing vegan options for Londoners on Instagram and can confirm that this city is home to one of the most vegan-friendly food scenes in the world!”

6. You can still have desserts

Yes, we know that giving up milk chocolate may seem like the end of the world, but the truth is that there are plenty of tasty alternatives.

“Whether you’re looking for plant-based, healthier desserts, or you just have an insatiable sweet tooth, there’s no missing out when it comes to vegan sweet treats,” Serena says. “A lot of supermarket products are accidentally vegan, and it’s easy to bake vegan too - find cheat sheets online including substitutes like ‘flax eggs’, apple sauce, and soya milk. If you’re after healthy recipes, Emma Hollingsworth has a new cookbook out called Vegan Treats, and her recipes are foolproof!”

7. It could be the start of a bigger change

If you’re interested in veganism because of ethical reasons, your diet is just one small part of a much bigger lifestyle philosophy. Veganism as a term relates to standing against the cruelty and exploitation of animals for human gain, and as animals are used in the production of everything from clothing and make-up to furniture and accessories, going vegan can result in huge changes to your daily life.

Luckily, as the interest in veganism has grown so has the number of brands producing items that are cruelty-free and animal-friendly. A quick search online will show a huge array of vegan clothing companies and skincare offerings – we suggest diving in to discover them all.

How can textile fibres made from food waste & algae benefit your skin?

The scale of the food waste problem and a solution