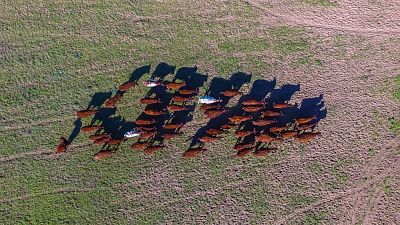 Vegan documentaries are trending at the moment. With major streaming platforms like Netflix showing 2014’s ‘Cowspiracy’ and most recently releasing ‘The Game Changers’, many are asking themselves, can a vegan documentary convince me to quit meat?

Amidst the noise, one emerging director has cut through with a film so concise you can watch it in your lunch break.

Alex Lockwood’s short film, 73 cows, is a cinematic masterpiece about the first farmer in the UK to trade beef farming for sustainable organic vegan farming. He shot with a team of just four, with no budget, and has arguably produced one of the most poignant films on the topic in years.

A cinematic masterpiece about the first farmer in the UK to trade beef farming for sustainable organic vegan farming.

Just 15 minutes long, 73 Cows explores farmer Jay Wilde’s journey from beef to vegan farmer, giving up his entire herd of cattle in the process. Lockwood captures the cold, misty feel of the farm, echoed in Jay’s deep-seated struggle at having to slaughter animals he has grown to love.

“I never set out for it to be an award-winning film,” Lockwood tells me genuinely. “I only entered 73 Cows the night before the BAFTA deadline when a friend prompted me to. I was blown away when I won.”

Lockwood’s humble approach to the project was almost what moved me most. As a film maker, with a focus on issues of ethics, he’s always looking for stories to tell. But the idea for 73 cows merely stumbled across his path, when his wife showed him an article about Jay Wilde in the newspaper.

It was as simple as sending a swift Facebook message, he tells me, before Lockwood was at the farm himself, instantly bonding with Jay and his wife Katya.

As soon as he met Jay in person, Lockwood says he could feel the excitement brewing, as it was clear the farmer had such a strong message to convey. Having wrestled inwardly for years with the conflict of rearing cows to be slaughtered, “it was clear how tormented he was”, the director says.

“It took seven months to film”, he says, “but we actually only filmed on seven days within that time frame.” At the time, Lockwood explains he was working full-time in a corporate film-making role that he despised. Faced with an unimaginative and repetitive schedule, 73 Cows was a welcome outlet for Lockwood’s creativity. He had very limited periods in which he could shoot, so it was all done in his spare time, making it all the more impressive. “I wanted to make something I could be proud of,” he says passionately.

Lockwood describes how watching ‘What the Health’ on Netflix marked the precise moment he decided to become vegetarian three years ago. Having directly experienced the power documentaries can harness, he hopes 73 Cows is similarly meaningful for viewers.

Shooting 73 Cows was the catalyst the director needed to go vegan, and it’s not hard to see why after watching the short film play out. It’s a beautifully touching representation of one man’s story and the darkness behind modern day beef farming.

While you're at it, watch Alex Lockwood’s subsequent film Test Subjects which confronts the validity of animal testing in relation to human health. The director is also working with British writer and political commentator George Monbiot on a feature film. In collaboration with 'We Animals', it will address the urgency of the climate crisis and Monbiot’s involvement with activism group Extinction Rebellion.

73 Cows is a multiple award-winning film, receiving the 2019 BAFTA for British Short Film, crowned winner of the Environment prize at The Smalls Film Festival, and was even screened at the European Parliament.

This underwater plant absorbs carbon 30 times faster than a rainforest