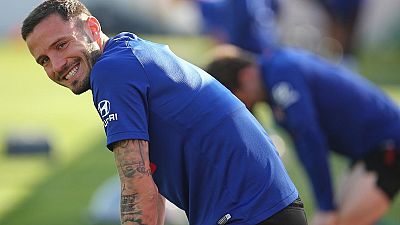 As athletes often rely on a protein-heavy diet, the myth that high-level sportspeople need to consume animal products to succeed has persisted for decades. But, since the release of The Game Changers two years ago, the conversation around veganism and elite sport has begun to evolve.

At 25, Atlético Madrid’s Saúl Ñíguez is already one of the best midfielders in Europe - if not the world - with a host of senior caps for Spain also under his belt. What you may not know is that the Spaniard follows an entirely plant-based diet to fuel his training.

But Saúl doesn’t refer to himself as a vegan yet, as he considers veganism to be about far more than just food - “it is a lifestyle,” he tells Euronews Living.

Having not eaten meat in a while, he used lockdown as a chance to stop eating eggs and move away from animal products entirely.

“The truth is that it hasn’t been difficult for me,” Saúl explains, “because I’ve done it through a slow process, and always doing it in a way controlled by a nutritionist.”

Now following a fully plant-based diet, the footballer is keen to dispel the belief that athletes need meat and animal products to succeed. I ask Saúl what he thinks about this old-fashioned notion.

“Well,” he laughs, “it is a belief. It is a wrong belief, though. When you are vegan the only vitamin you lack, which is very important and mandatory to take, is B12. The people who talk about these issues are people who have not been well-informed.”

‘The best thing for me was to be a vegetarian’

The initial decision to become vegetarian was fuelled by a serious health issue. During his Champions League debut in February 2015, shortly before half-time, Saúl went for the ball at the same time as Kyriakos Papadopoulos (then playing for Bayer Leverkusen). The two clashed, and the Spaniard fell to the turf in excruciating pain. He was rushed to hospital with a “destroyed” kidney, in the words of Atlético’s president at the time.

It was this injury which eventually led Saúl to forgo meat entirely. “The nutritionist recommended that the best thing for my kidney is to be a vegetarian,” he says. “The left kidney was overworking to process proteins.”

Now, fully recovered, Saúl’s training schedule is fairly full-on - much as you would expect from a top footballer. Focusing on heavier sessions in the first half of the week, the second half is then structured around tapering for weekend matches.

His diet, therefore, needs to contain all the essential proteins for muscle recovery, along with enough calories to maintain energy levels throughout the week.

“A typical breakfast for me is toast with avocado and tomato - with the best, healthiest bread,” says Saúl outlining a typical day of meals. “I finish training and eat fruit - lots of fruit after training! Usually bananas and kiwis, or if training is lighter then I eat a little more variety, such as mango or grapes.”

Along with snacks throughout the day, Saúl’s dinners are predominantly divided neatly into carbohydrates, proteins and fats - to ensure the right balance of nutrients. “It’s always usually half a plate of vegetables, or more,” he jokes, “but with a good structure.”

Curry is always a firm favourite for the 25-year-old, largely because of its versatility. He usually adds chickpeas and vegetables for balance. He’s also a big supporter of Spanish food start-upHeura, which makes regular appearances on Saúl’s Instagram stories, as he whips up the vegan meat substitute into an array of dishes.

“What I like the most about vegan recipes are the desserts though. The desserts seem spectacular to me that they are healthy and I can eat them,” he adds with a laugh.

‘I think it is very beneficial for everyone’

I ask Saúl what his teammates think of his plant-based diet, particularly as I spot Heura cropping up on other players’ social media channels too.

“My colleagues are surprised, it’s something new for them,” he explains. “The truth is that many follow my diet because it grabs their attention, and then they eat my food - and they feel good eating my food!

“In the end, trying it once doesn’t change anything, but when you have been eating vegan and healthy for two weeks it changes your life a lot. You sleep better, you are less bloated, when you are competing you recover more quickly - I think it is very beneficial for everyone.”

Saúl is keen to highlight though, that a vegan diet isn’t automatically healthy. People can’t just ditch animal products and assume their food is good - in order to feel the true benefits, a plant-based diet needs to be holistic, balanced, and genuinely healthy.

He’s recently shown his commitment to promoting positive, healthy lifestyles by establishing Club Costa City with his brother Aaron, who plays for Malaga. The pair teased the club’s creation back in June - briefly sending Manchester United fans into a tailspin, as people leapt to the conclusion that Saúl would be transferring to Old Trafford.

In fact, the brothers established a grassroots football project in their hometown of Elche, “with the aim of generating healthy habits,” Saúl told AS at the time.

‘Being vegan is much, much more’

As we discuss veganism and its rise in popularity in sport, particularly after The Game Changers, Saúl raises an issue with the terminology.

“Being plant-based or vegetarian doesn’t mean vegan, there is a huge difference. One, so to speak, is a diet. Being vegan is much, much more,” he says.

“I’m a strict vegetarian. I don’t eat anything which comes from animals, but that’s separate from the lifestyle of veganism.”

It’s clear that, for Saúl, this is a journey; shunning eggs, dairy and meat aren’t enough for him to call himself a vegan. Instead, he wants to move towards the holistic meaning of veganism, but he recognises he isn’t there yet.

‘Having a nutritionist is not cheap’

One of the criticisms often levelled at high-profile celebrities on plant-based diets is that this lifestyle is only afforded to the wealthy and privileged. Particularly as athletes - professional or otherwise - need to ensure their meals are balanced and appropriate, surely working with a nutritionist is essential? Does this, therefore, mean that only the wealthy can afford to do sport while plant-based?

But, while he does recommend following a nutritionist’s advice where possible, he doesn’t agree that it is an essential part of leaving animal products behind.

“I think it would be a good investment for a person, but it’s not necessary.”