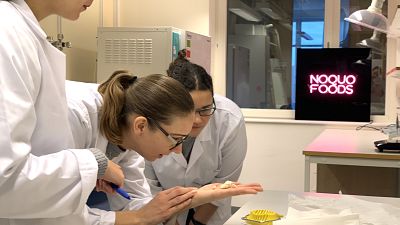 Whatever the future looks like, we are going to need to eat. Food security could prove to be a big problem as changing climates make growing the staples we rely on more difficult.

The environmental impact of animal agriculture also poses a problem. According to the UN FAO, it is responsible for 18 per cent of greenhouse gas emissions.

A sustainable future for the food we eat is so important that the EIT Food has just invested over €5 million in high-impact sustainable food startups. The money is intended to help businesses which are transforming the way our food systems work, to survive the impact of the COVID-19 pandemic.

But what could this transformation of our food systems look like? Startups across Europe are changing the way we think about what we eat and finding novel solutions to the environmental problems associated with feeding the planet.

Here are five innovative startups on the rise.

The sustainable alternative to animal-based protein has the same nutritional value as popular plant-based protein, soy.

“Our technology to extract protein from rapeseed has the potential to transform the protein market by reducing food insecurity and increasing plant-based eating habits of consumers around the world,” says co-founder Magdalena Kozłowska.

The technology developed by the startup to extract protein from waste could also be collected from other plants used to produce oil like sunflower or soybeans.

As the number of people adopting a plant-based diet is growing, so too is the market for alternatives for cheese and milk. While milk made from plants has taken off with hundreds of successful options, finding a decent cheese alternative can be difficult.

Noquo, based in Sweden, is hoping to develop a cheese with minimal environmental impact that also tastes good. Usually, alternatives are made from coconut oil and plant starch or nuts but Noquo founders Anja Leissner and Sorosh Tavakoli are making theirs out of legumes (deriving from the fruit or seed of the plant). They hope it will slice, melt and perhaps most importantly taste just like the real thing.

“We believed that the old school cheese making technology based on animal milk was no longer a status quo we could support,” writes Tavakoli, “knowing what we know today about its environmental impact, health issues and animal welfare challenges.”

Karma is an app that allows food retailers to sell their leftover food to consumers for half the price. Initiated in Sweden, it originally worked with restaurants and supermarkets in the country but has now expanded operations to include the UK and France.

“If food waste was a country, it would be the 3rd biggest CO2 emission contributing country in the world,” says Karma’s website. The team behind this startup wants to stop that by preventing surplus food, which would otherwise end up the bin, from being wasted.

Since it was founded, Karma has saved more than 800 tonnes of food waste. It has even received praise from Barack Obama.

French startup, Antofénol is another recipient of the EIT Food funding. It is looking to create a sustainable alternative for the preservatives sprayed on fruit and veg to keep it fresh.

“Our innovative technology allows us to extract agricultural waste from vineyards and transform it into a chemical-free product capable of replacing toxic substances that sit on our fruit and veg.” explains founder, Fanny Rolet.

“The benefit is two-fold– we replace molecules which could be harmful for the environment and health, whilst also recycling waste by transforming it into a product that can be used by the agricultural sector.”

A Barcelona company is reinventing the way that people eat protein by creating a soy-based option that blind testers have found indistinguishable from real meat in both flavour and appearance.

It isn’t just the experience that mimics real meat, but also the nutritional value. Heura is low in saturated fats, has no cholesterol and twice as much protein as an egg.

Marc Coloma says the company was founded with the idea to sustainably feed the world’s growing population. With livestock farming a big driver of climate change and disease, the company wats to encourage more people to try eating alternatives by replicating the experience of eating meat.